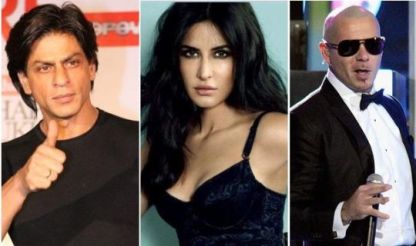 As the much awaited, opening ceremony of the Indian Premiere League (IPL) is fast approaching the celebrity line up has been revealed for the event. Bollywood super star Shahrukh Khan and international rapper Pitbull are expected to open the event with performances on April 2, 2013 in Kolkata.

Apart from Shahrukh, actress Katrina Kaif is also expected to perform at the ceremony. This will also mark the beginning of the sixth season of the IPL series. Shahrukh is the owner of the IPL team Kolkata Knight riders, who had won the earlier season.

The ‘My Name Is Khan’ actor owns the team in partnership with veteran actress Juhi Chawla. As per the tradition the winners of the earlier season host the opening ceremony of the upcoming season. Sources familiar with the development say that the actor is in love with the ‘city of joy’ and is very excited to perform there.

This will also mark the first time Katrina will be performing. International star Pitbull is known for his hits like ‘M.I.A.M.I’, ‘Planet Pit’ and ‘Armando’, who is also excited to perform in the city. Reports say that the rapper had agreed to perform within minutes when he was told the Shahrukh Khan and Katrina Kaif will also be performing.