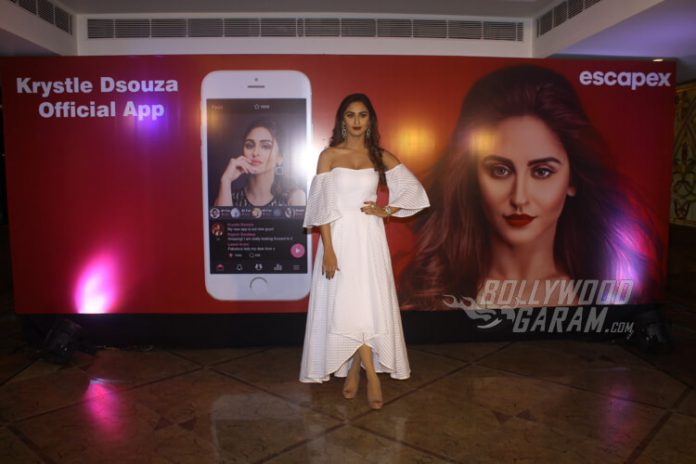 Looks like getting your own official app to keep in touch with fans is the latest trend in Bollywood! Soon after Dishan Patani, Nargis Fakhri and Poonam Pandey, popular television actress Krystle D’Souza too launched her official mobile app on Thursday, April 20.

The Krystle D’Souza Official mobile app can be downloaded for both Android and iOS and has been created in collaboration with New-York based tech firm EscapeX. During the app launch, Krystal promised daily interaction with her fans through live video, chats and exclusive content. While interacting with the media at the press conference she said, “It’s a really nice feeling to have your own app. Going digital is so much fun and it’s a trending phenomena in India. Through this app, I will be sharing my latest pictures, videos and my personal and professional daily updates and will also do live chat with my fan once in a while. This app will have my exclusive content which my followers will not be able to get on any other social media platform. I am also going to have meet and greet session with my followers through various contest through this app.”

On the work front, Krystle D’Souza was last seen in the television series Brahmarakshasa and is rumored to have been dating co-star Karan Tacker from the show, Ek Hazaron Mein Meri Behna Hai. However, the two prefer keeping their relationship under wraps and haven’t responded to these rumors.

The actress looked lovely in a summery white off shoulder midi dress with flared sleeves. Her dark lips made the entire look pop!