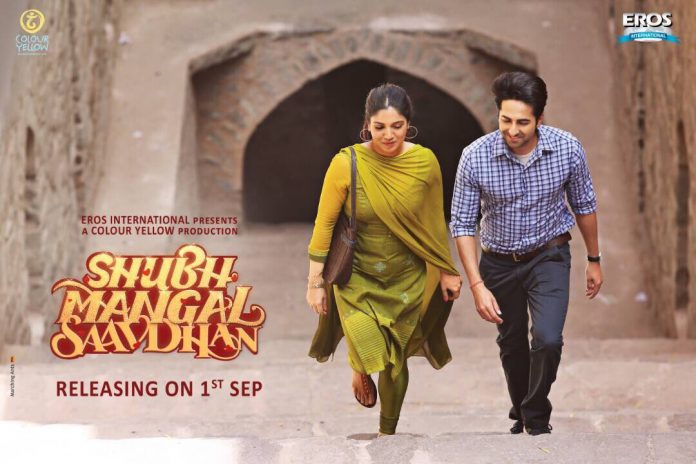 The quirky on-screen couple, Ayushmann Khurrana and Bhumi Pednekar are all set to collaborate again. After the success of their previous flick Dum Lagake Haisha, the actors are ready with another project that tackles a similar subject. The makers of Shubh Mangal Saavdhan released the first poster of the film and have also revealed its release date. The first poster has shown Bhumi and Ayushmann in a shy yet romantic mood and the release date has been mentioned as September 1, 2017.

The story of the movie is about a husband and wife who deal with a few intimate marital issues. The film is directed by R.S. Prasanna and produced by Anand L. Rai. The audience has already seen the chemistry between Ayushmann and Bhumi in Dum Lagake Haisha which gained a lot of appreciation from the audience. The earlier flick could not do well at the box office but was appreciated for a unique pairing and amazing chemistry.

The music for Shubh Mangal Saavdhan is composed by Anu Malik while the lyrics have been penned down by Varun Grover. Ayushmann shot to fame with Vicky Donor and is often a part of such unique stories which have managed to hit the right chord with the audience. Bhumi started off as a casting crew member, but ended up bagging the female lead in Dum Lagake Haisha for which she also won a Filmfare Award for Best Female Debut.