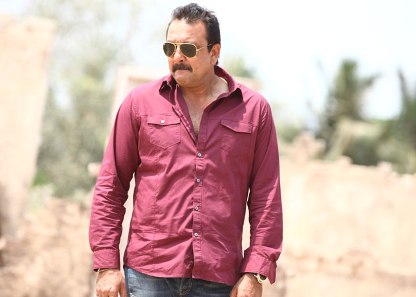 Bollywood actor Sanjay Dutt is working day and night of late, in order to complete his pending work before he heads to prison. Dutt shoots in the day and dubs in the night. Just a few days are left for his surrender to the court, due to which it seems like the actor is putting in all efforts to complete his outstanding work.

Sources have revealed that the star is busy shooting for his upcoming movie ‘Policegiri’ by Rahul Aggarwal during the day and spends the night in dubbing. Close friends of the ‘Angeepath’ actor say that as he has limited time and is trying his best to divide his time between his family and work.

According to sources, even on the sets Dutt is extremely professional and gets very limited time to spend with his family. The ‘Son of Sardar’ star is running against time and intends to finish his shoots so that he can prepare for his time behind bars.

Dutt has been given four weeks to surrender to the court after his 5-year sentence in relation to the 1993 Mumbai bomb blasts. Dutt has already spent 1.5 years behind bars.