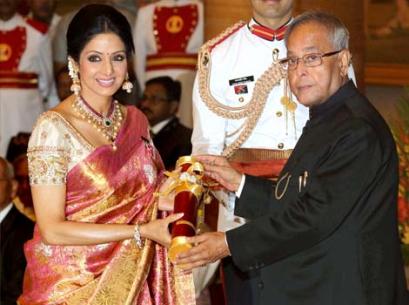 Bollywood’s veteran actress Sridevi has been awarded with the Padma Shri award from the Indian President Pranab Mukherjee on April 5, 2013. The actress received her award at the Rashtrapati Bhavan in New Delhi.

The veteran actress arrived at the venue with her daughters Jhanvi and Khushi and appeared elegant in a pink and golden kanjeevaram sari. Sridevi had made a comeback to Bollywood with the blockbuster movie ‘English Vinglish’. On April 5, 2013, the President honoured 108 Padma Award winners.

With the recent honour, the actress has won one out of the three highest civilian awards. Sridevi as an actress, has worked in Tamil, Malayalam and a few Kannada films. The actress is also considered to be the first female superstar of the Hindi film industry. Some of her popular Bollywood movies include ‘Mr. India’, ‘Chandni’, ‘Lamhe’, ‘Khuda Gawah’, ‘Gumrah’, ‘Judai’, ‘Chaalbaaz’, ‘Sadma’ and ‘Nagina’. Sridevi took a long break after her marriage with producer Boney Kapoor, where she refrained from making movies. After being away from the cameras for 15 years, the star returned with the flick ‘English Vinglish’, which was well appreciated by the audience and critics alike.