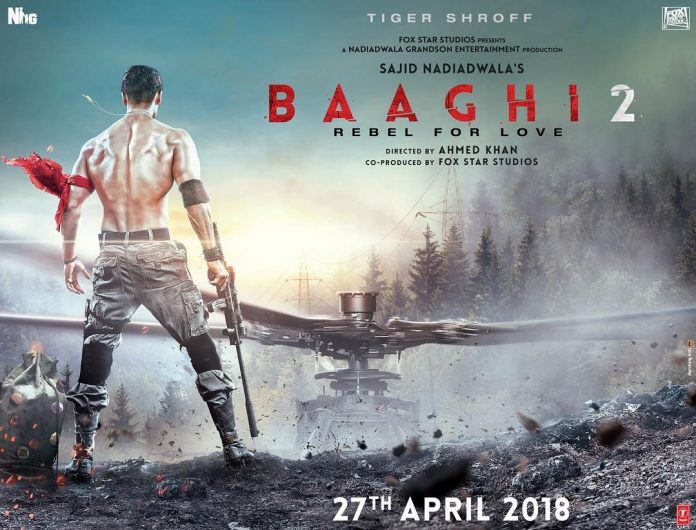 Tiger Shroff’s sequel to Baaghi will release on April 27, 2018

The famous Indian actor and martial artist, Tiger Shroff is back to enrapture us all with his sequel to Baaghi. The makers of the film released it’s first poster on May 2, 2017. The poster is thrilling and reminds one of the Hollywood action heroes such as Arnold Schwarzenegger and Sylvester Stallone. It has the feel of Terminator and Rambo. Baaghi 2, is back with another story of rebel lovers.

In the poster, we can see that Tiger Shroff is flaunting his chiseled back without revealing his face. He is holding a huge gun in his hands and feels ready to face the villain. The background of the poster gives us a hint that the sequel too will have a lot of action scenes.

The previous version of Baaghi 2 was based on the Telugu film, Varsham which starred Bahubali actor, Prabhas and Trisha Krishnan. The film had also introduced Bollywood to South India’s traditional martial art form, Kalaripayattu.

While the first Baaghi was directed by Sabbir Khan, its sequel is being directed by choreographer turned film-maker Ahmed Khan. It will be co-produced by Fox Star Studios. Tiger Shroff is taking training in China under the guidance of special martial arts director, Tony Ching to prepare the stunts for his film. The female lead and the villain is not yet announced.

Baaghi 2 will release on April 27, 2018. Meanwhile, we can see the actor doing some crazy stunts and dance moves in his upcoming movie Munna Michael, in which the actor is paying a tribute to the King of Pop, Michael Jackson. Stay tuned for more updates on your favorite star, Tiger Shroff exclusively on Bollywood Garam.