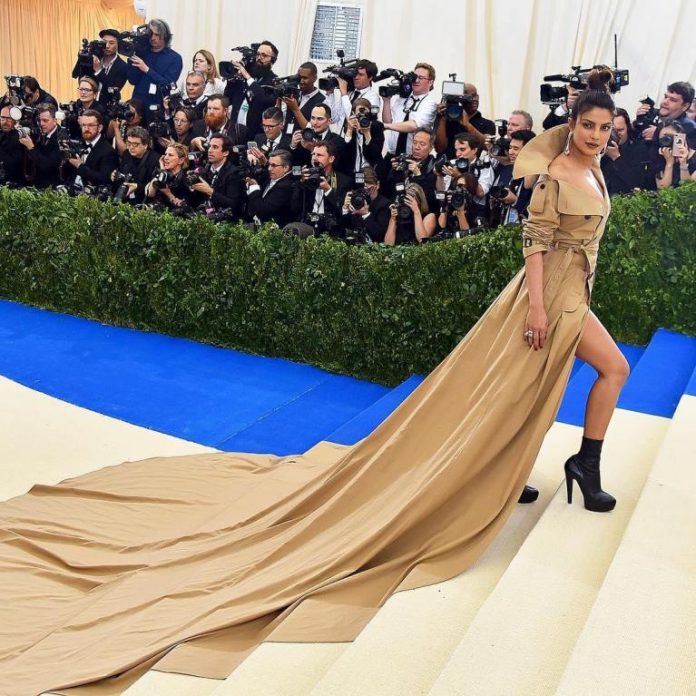 Actress Priyanka Chopra continues to spread her charm abroad. The Barfi actress made a glamorous appearance on the red carpet at the prestigious Met Gala 2017 held in New York City at the Metropolitan Museum of Arts. Priyanka looked gorgeous in a custom made gown by Ralph Lauren, which had such a long train for which the actress had a dedicated helper to get her up the stairs.

The Quantico star made a fashion statement and impressed the fashion police as she completed her look with a messy bun. The Met Gala is known as the biggest night in the fashion circuit and this year’s theme was a tribute to the Japanese designer Rei Kawkubo, who founded the fashion house Comme des Garçons.

Priyanka, on the red carpet, posed with singer Nick Jonas. While the fashion critics gave a thumbs up for the beige trench coat and train, social media was trending with Chopra’s pictures from the red carpet. Many made jokes calling her the new brand ambassador for Swacch Bharat Abhiyan for cleaning in an innovative way. The International media was all praises for the actress and called her one of the Best Dressed at the event, leaving behind some pop fashion icons like Katy Perry, Jennifer Lopez and Rihanna.

Priyanka Chopra recently returned to India after completing her work commitments with Quantico and the upcoming beach film, Baywatch. After returning, the actress was seen busy interacting with filmmakers in the country for new projects. Priyanka has reportedly given her nod for the biopic of late astronaut Kalpana Chawla. The Bajirao Mastani actress also promoted her upcoming movie Baywatch in Mumbai. The upcoming Hollywood flick is directed by Seth Gordon will be released in theatres on May 25, 2017.