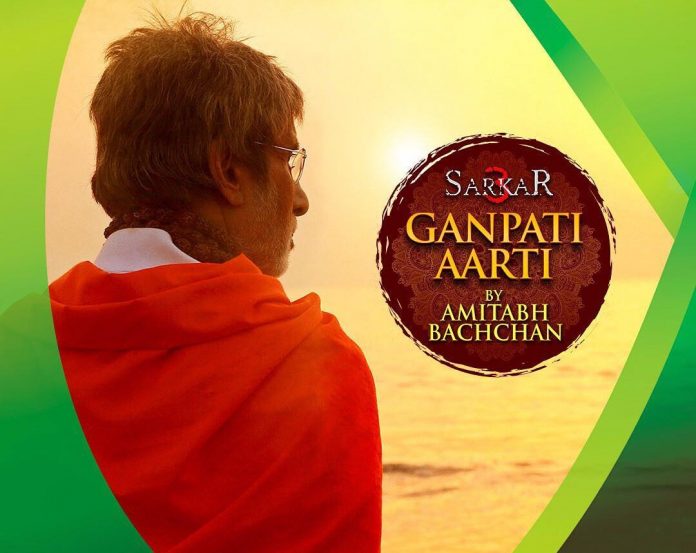 Amitabh Bachchan returns as Subhash Nagre in Sarkar 3. It is the third movie of the Ram Varma directed franchise. The upcoming film has a soulful Ganpati Aarti which is sung by Big B himself. The song is composed by Rohan Vinayak and it will launch on May 2, 2017. The song features a larger than life multi headed idol of Ganpati. The track is set during Ganpati Visarjan and is shot at a Mumbai beach.

While talking about his song with leading daily ToI, Amitabh Bachchan said, “There is something about the ‘Ganesha Aarti’ that invokes great divinity; an emotion, that is rare and lasting. Sant Ramdas created this aarti in the 1600s in a raag (Raag Jogiya), that was befitting of great character and eminence. The words are in vernacular Marathi — a rarity for most other Hindu bhajans and devotional songs. Yet, the way the aarti has been structured, it cuts across all language barriers, if at all there are any.”

He further adds that,  “I feel privileged and blessed, to have been asked to sing it for ‘Sarkar 3’. I sang the aarti for the Siddhivinayak Mandir at Prabhadevi, and when I discussed it with Ram Gopal Varma, I suggested that we do the same for the film as well. We have given it a different tone, but the sentiment, the emotion and the divinity remain in as much prominence as the original.”

The release date of the movie has been postponed by a month and will now hit theatres on May 12, 2017. Stay put to catch the official video of Ganpati Aarti by Amitabh Bachchan from Sarkar 3 exclusively on Bollywood Garam!

Update – Official Ganesh Aarti by Amitabh Bachchan for Sarkar 3 out on Eros Now!