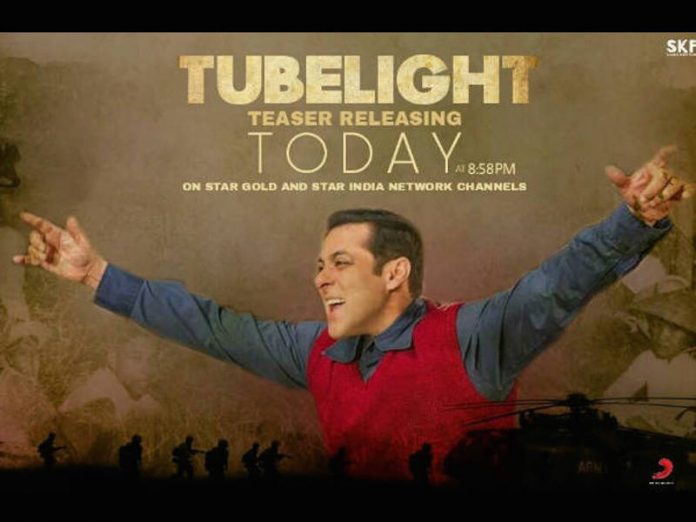 Salman Khan’s most awaited movie, Tubelight’s teaser trailer is due to release today, May 4 and fans simply can’t contain their excitement! Such is the craze around Salman’s movie based on Indo – China was in 1962 that director Kabir Khan hosted a special teaser trailer screening for die-hard Salman Khan fans earlier in the day.

A few pictures have been posted to the official Instagram account of the movie which goes by the handle Tubelightkieid and shows Kabir Khan’s little ones, Vivaan and Sanya in cute Tubelight merchandise. The movie releases on Eid, June 25, 2017 and makers have done a countdown to the much hyped teaser trailer’s launch by releasing five interesting posters of the movie. Each poster shows a unique side of lead actor Salman Khan – from being an inquisitive student, to a doting father, a loving brother and a soldier of war – it’s all there.

The movie stars Salman Khan, opposite chinese actress Zhu Zhu, child artist Matin Rey Tangu, Sohail Khan, Late Om Puri and Shahrukh Khan in a cameo. This is definitely a unique cast and it’ll be interesting to see how they compliment each other on screen.

So as you eagerly wait for a few more hours for Tubelight teaser, enjoy the exclusive Tubelight posters and photos from the special teaser screening –