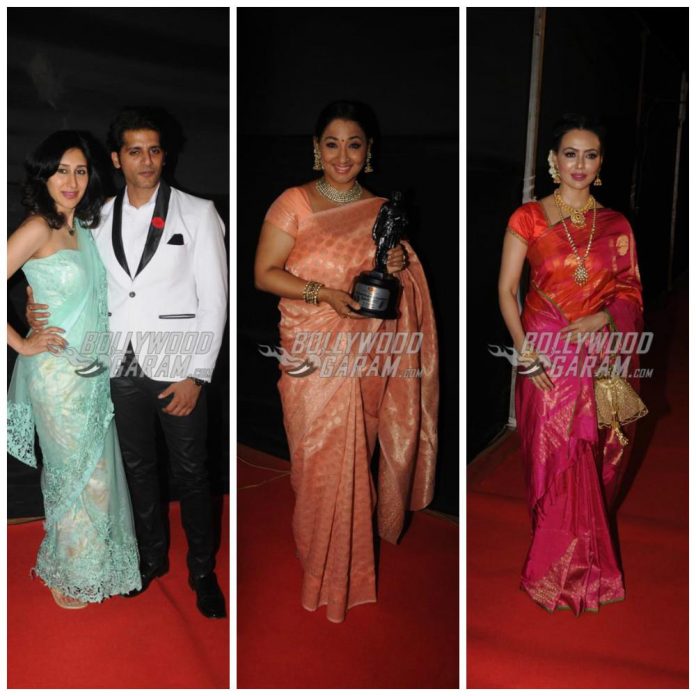 Celebrities from the TV industry graced the Dadasaheb Phalke Film Foundation Awards held in Mumbai on May 7, 2017. TV actors Karanvir Bohra and Shruti Ulfat claimed the top honours at the awards ceremony. Karanvir won the Best Actor Award for his performance in Naagin 2 as Rocky while Shruti won the Best Actress Award for her stellar performance on the Zee TV show, Jamai Raja.

The Naagin 2 actor expressed his happiness through an Instagram post and wrote, “Such an honor to receive #dadasahebphalkeaward for #naagin2 Really respect this award coz it honors #technicians musicians#journalists #pressphotographers #actors. We are always in front of the camera but all you fans must know that it is these people who actually work the hardest. Hats off to the #dadasahebphalkefoundationawards for such an endeavor.” The actor further added that he dedicates his award to his twin daughters Miko and Nonu as they were born on October 19, 2017, the day when the TRPs of the show Naagin 2 came out and became the number one show. Karanvir also said that the day his daughters returned to India from Canada, he received a call from the jury that he had won the award. Karanvir was accompanied by wife Teejay and appeared in a white and black tuxedo while Teejay looked pretty in a pastel green saree.

Shruti Ulfat too expressed her happiness on the social media and wrote, “Honoured by Dada Saheb Phalke Award for Best Actress in Television. 2017…deepest gratitude to Dada Saheb Film Foundation.” She looked beautiful in a peach silk saree at the event.

The ceremony also saw actress Sana Khaan claim Best Debutant Award for her movie Wajah Tum Ho, where she was seen playing the role of a lawyer and also performed a few bold scenes. Sana also took to Instagram to show her happiness about winning the award and was quoted saying, “What more to say … I am humbled and honoured to have finally made it in an award winning category ✨yes best debutant for “wajah tum ho” ?thank u Dadasaheb phalke film foundation ??destiny definitely has its own way n time ?thank u @tseries.official bhushanji ✌?n most importantly my director @vishalpandya05 … vish iski “wajah tum ho” ?????.” Sana has appeared on various shows including Khatron Ke Khiladi and Bigg Boss. She wore an orange -pink saree paired with traditional jewellery.

Amazing actors like Divya Dutta, Sharman Joshi and Riddhima Pandit amongst others too won an award under various categories.