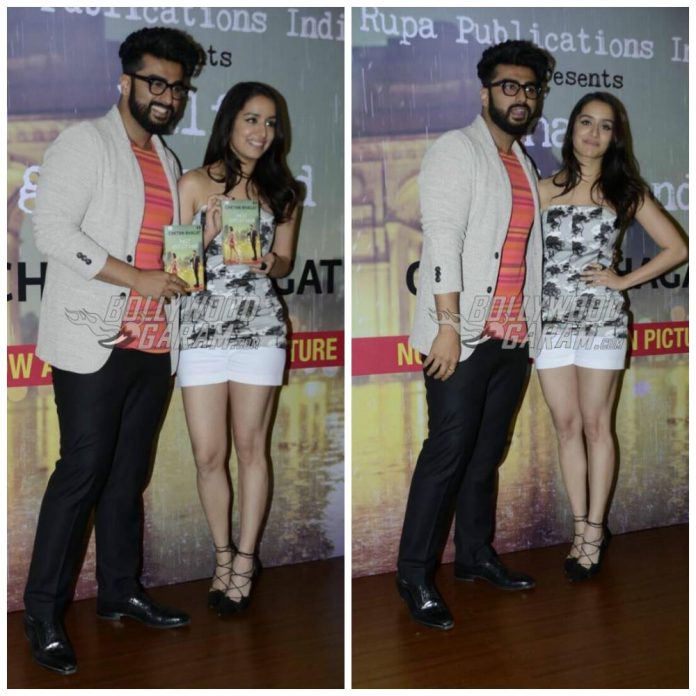 The release date of the upcoming movie Half Girlfriend is fast approaching and the makers are in full gear with promotions. Lead actors Arjun Kapoor and Shraddha Kapoor launched author Chetan Bhagat’s book Half Girlfriend which now had a new cover. The launch event also saw the presence of Chetan Bhagat and director Mohit Suri.

Chetan Bhagat has this time co-produced the flick which is based on his book of the same name. Bhagat’s earlier books Five Point Someone, A Night At A Call Centre and 2 States have been made in to the movies 3 Idiots, Hello and 2 States respectively. 3 Idiots and 2 States proved to be a good success at the box office but A Night At A Call Centre inspired  by Hello failed to impress the audience. Shraddha, Arjun and Mohit interacted with the media and shared their experience of shooting the film.

Shraddha Kapoor looked trendy in white shorts and black and white off shoulder top. The Ek Villain actress also thanked director Mohit Suri for casting her for his movie and expressed that she would like to be a part of every movie that he makes. The director and the actors also talked about their experience of shooting for the song Baarish. Suri has travelled to Delhi, Patna, Dumraon, Varanasi, Cape Town and New York along with his crew to get the best shots for the flick. Reports say that the makers hired 200 students from different colleges to play extras as many of the scenes wanted to show students from Delhi University.