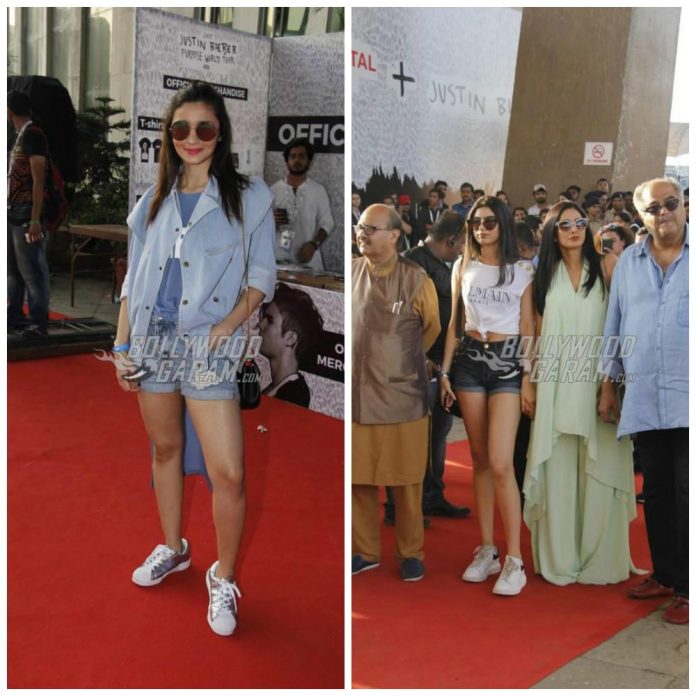 It’s finally happening! Justin Bieber landed in Mumbai in the wee hours of May 10 and his much awaited Jio Justin Bieber Purpose World Tour 2017 India concert is currently underway at the DY Patil Stadium in Mumbai which is packed with more than 45,000 fans or should we say, die-hard Beliebers. Despite the long lines, summer heat and over 50 people reportedly having fallen unconscious, the enthusiasm is soaring to see Bieber perform live for the first time in India.

The concert was opened with performances by DJ Sartek, DJ Zaeden and DJ Alan Walker after which Justin Bieber took the stage amongst an uproarious cheer from the crowd!DJ Alan Walker, who is popular for his song Faded performed the opening act for Bieber. The concert started off at 4 pm but star of the night Justin Bieber’s performance kicked off only at 8 20 pm. He opened with his hit songs including, ‘Where are you now’ and ‘Mark my words’.

Alia Bhatt was dressed up perfectly for the occasion and was seen in denims shorts, t-shirt and a jacket while Arbaaz and Malaika made an appearance together at the venue. Veteran actress Poonam Dhillon shed her regular Indian look and was seen in a trendy off shoulder top and black denims. Bhumi Pednekar was seen in a see through top, shorts and a long jacket. Shweta Bachchan was seen accompanied by a few friends while Boney Kapoor’s family was seen accompanied by politician Amar Singh.

As the Justin Bieber concert is currently under way, feast your eyes on this exclusive gallery of Bollywood celebrities spotted at the concert venue –