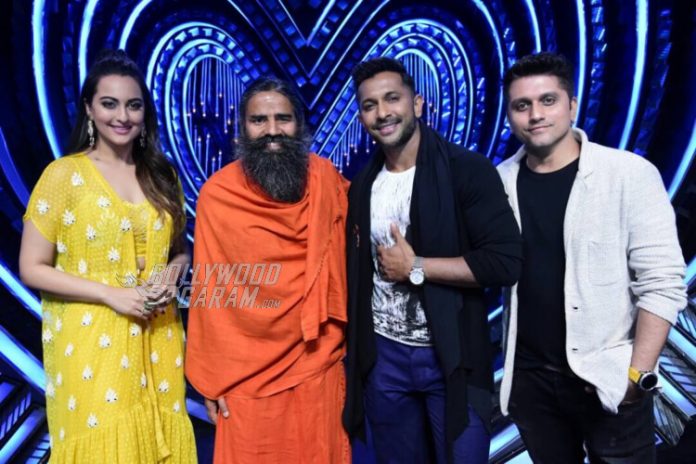 A celebrity dance show suddenly turned in to a celebrity fitness show, when yoga guru Baba Ramdev appeared on sets of Nach Baliye 8 on May 16, 2017. Not just the contestants, but even the judges – Sonakshi Sinha, Mohit Suri and Terence Lewis and hosts Karan Tacker and Upasana Singh, were seen trying out some of the unique asanas taught by controversial public figure, Baba Ramdev.

The pictures clearly indicate that the dance show took a back seat and the contestants were seen indulging in matching, not steps, but asanas with the yoga expert. Actress Sonakshi Sinha, who looked pretty in a yellow outfit, was seen trying her hand on the breathing exercises that were instructed by Baba Ramdev.

Contestant Brent Gable was one of the few contestants who managed to get close to what Baba Ramdev performed on stage with a head stand. The participants of Nach Baliye 8 had fun with the Yogi, who was quite entertaining. He added a more fun twist to the ancient Indian practice, and encouraged the participants, as well as viewers, to indulge more in this healthy lifestyle. We want to see more of Baba Ramdev on Indian reality shows!

Enjoy these exclusive pictures from sets of Nach Baliye 8 –