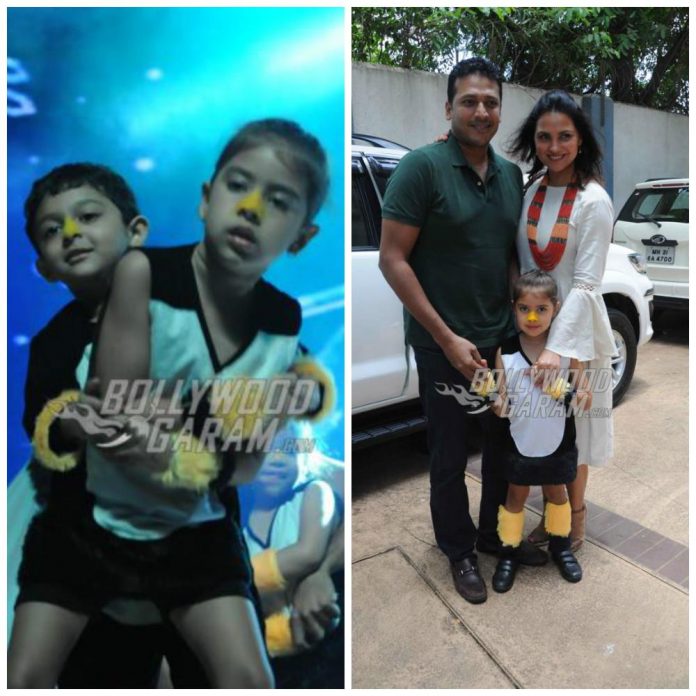 Former beauty queen, Lara Dutta and Indian Tennis player Mahesh Bhupathi are parents to five year old Saira Bhupathi. Lara and Mahesh attended an event where daughter Saira was a part of a dance show by choreographer Shiamak Davar in Mumbai on May 28, 2017. Little Saira looked adorable in a penguin costume and was seen performing with other kids.

Mahesh Bhupathi and Lara Dutta were seen enjoying their daughter’s performance and even posed for the shutterbugs as a perfect family. The Singh Is Bliing actress appeared in an off white dress and a multi-coloured necklace. Lara, in recent times, has not taken on a number of acting roles, but has been seen in a couple of roles in Fitoor and Azhar.

The actress is currently preparing for her upcoming production under her banner Bheegi Basanti Entertainment. The film will be directed by Sushil Rajpal and will also star Vinay. This will be Lara’s second venture as a producer. Earlier the actress had produced the film Chalo Dilli in 2011 which was her maiden venture as a producer.

Lara confirmed the news about her upcoming venture and said, “We at Bheegi Basanti Entertainment have been on the lookout for another story that had the same humour and emotional connect that Chalo Dilli had and have finally found that with a script that National Award winning director Sushil Rajpal has brought us.” The Billu actress while talking about her co-star Vinay, was all praises for the actor and said that she enjoys sharing screen space with him. The upcoming film is expected to go on floors in June, 2017.