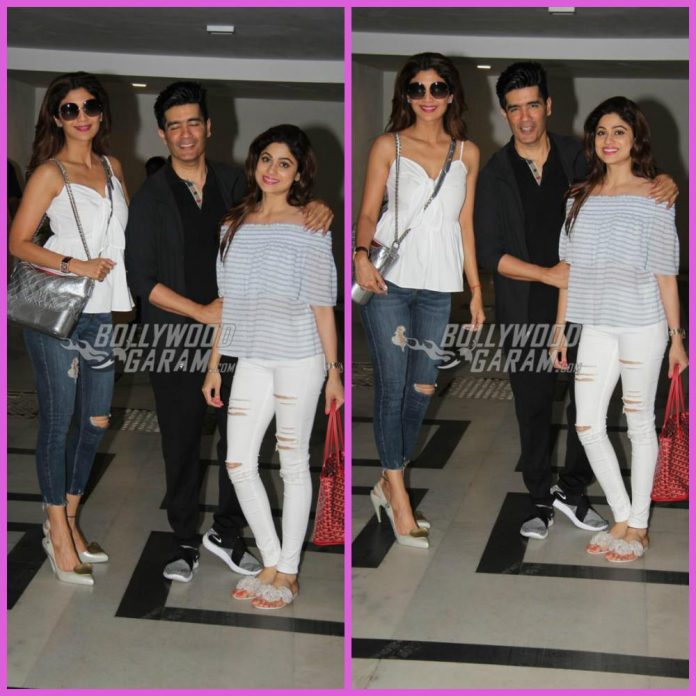 Shilpa, Shamita and Manish were snapped posing for the shutterbugs outside his house. The Bollywood divas were earlier seen spending time with Karan Johar at his residence. Shilpa looked cool in a summer white top and blue denims while Shamita was seen in a striped off-shoulder top and white ripped denims.

Manish, Shilpa and Shamita were all smiles as they were seen at the designer’s residence. On the work front, Shamita was last seen in the Tamil film Naan Aval Adhu in which she was seen playing the role of Geetha. The actress also participated on the celebrity dance reality show Jhalak Dikhhla Jaa in 2015.

Shilpa Shetty was in the news in recent times for a criminal case lodged against her husband Raj Kundra for non payments of dues to a textile supplier. After the reports, Kundra then released a statement saying that the textile supplier was misusing his connections and added that his wife Shilpa’s name is being dragged in to the matter for no reason. The statement added, “It’s sad that at every step of the way, my wife’s name is dragged in to create media hype. She was a non-executive, who had nothing to do with the daily running of the business.” Shilpa participates at various fitness events and recently celebrated her 42nd birthday with family and friends.