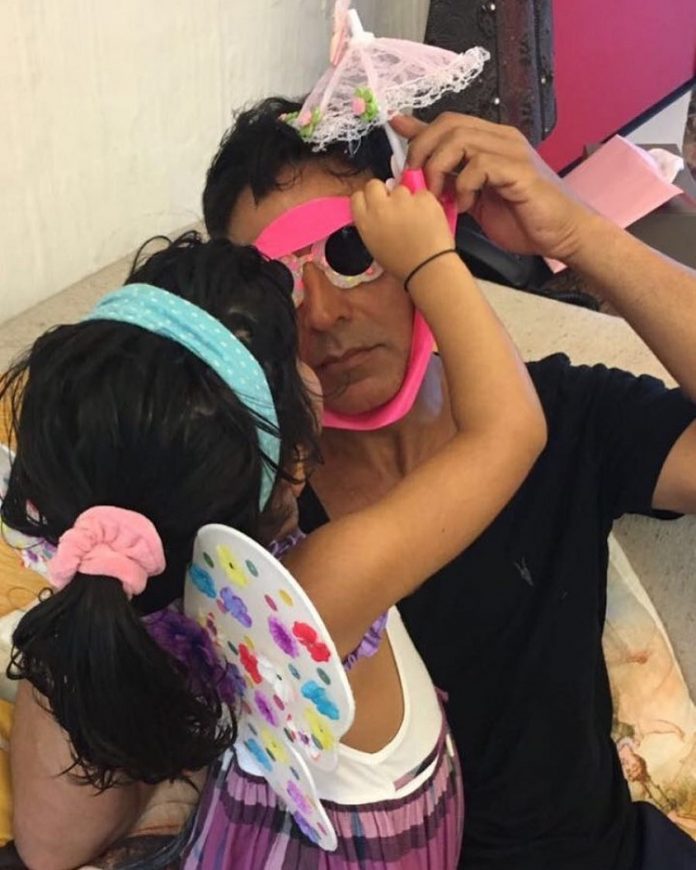 National-Award winner Akshay Kumar, was recently holidaying in Barcelona with his wife, Twinkle, son Aarav and daughter, Nitara. He shared a video on his social media account of himself and his cute little daughter Nitara, walking with a spring in their step.

He posted the video on Instagram and wrote, “There’s always a spring in my step when we are together 🙂 #FatherDaughterTime.”

Recently, Akshay’s wife, Twinkle Khanna also shared a picture with her mother, Dimple Kapadia. The mother-daughter were painting. She captioned the image as, “Mother and I are painting the town red..or blue or whatever color we please – Art class and loads of wine in Barcelona #artebarbcn”

Akshay had also posted a picture with his son, Aarav long back. He captioned the image as, “Every day is a #FathersDay if you have a son like that 🙂 #MakingMemories ‬#blessed”

On the work front, Akshay’s upcoming film is Toilet: Ek Prem Katha. The film is inspired by Swachh Bharat Abhiyan. It also features Bhumi Pednekar and Anupam Kher in the lead roles.

Bhumi Pednekar appreciates Akshay saying, “He is fantastic. He is actually a delight to work with. Toilet: Ek Prem Katha has been one of the greatest experiences of my life and I definitely have to credit him and the core team for that.”

Bhumi also adds, “It never felt that we are working, it was a like one long happy holiday. It felt like a bunch of very passionate people who have come together to have fun and everything else would just fall into place.”

The film, Toilet: Ek Prem Katha is directed by Shree Narayan Singh. Produced by Aruna Bhatia, the film is slated to release on August 11, 2017.

After, Toilet: Ek Prem Katha, Akshay will also be seen in Padman which is due to hit theaters in January 2018. His another biopic is Gold, which is about the Indian athlete, Balbir Singh, who won the gold medal in Olympics after India got Independence. Gold is said to release in August 2018.

Mother and I are painting the town red..or blue or whatever colour we please – Art class and loads of wine in Barcelona #artebarbcn