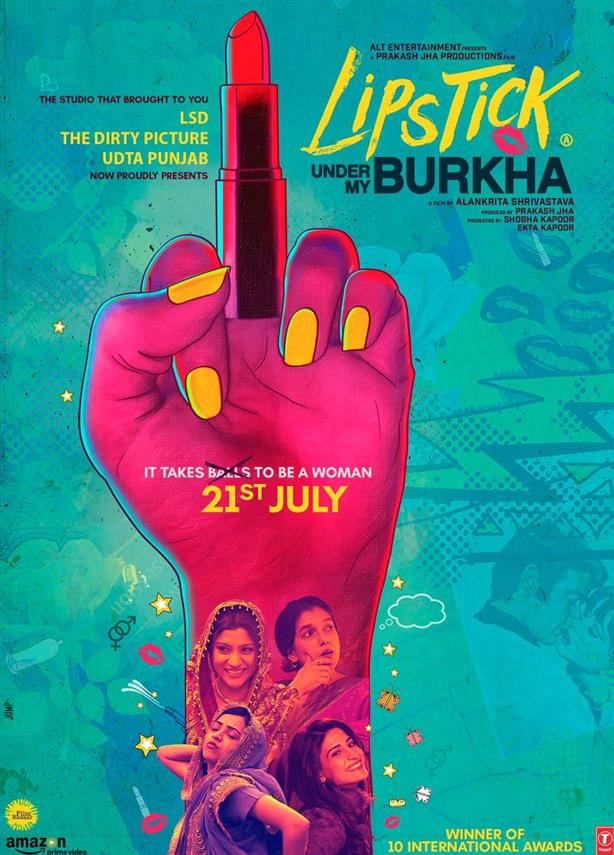 The film is yet to be released, and Lipstick Under My Burkha is already garnering heat from the Central Board of Film Certification (CBFC). The Board refused to pass the film, claiming that it showed women in bad light. However, after an appeal was made to the Film Certification Appellate Tribunal (FCAT), the film will be screened in theatres, but only for an adult audience.

And just after the film’s makers crossed one major hurdle, another one loomed ahead, thanks to the official poster of the film. The “middle finger” may have been replaced with a lipstick tube, but people began spreading the rumour that it was actually in rebellion towards the CBFC.

However, Ekta Kapoor, who now stands as a presenter for the film, made it very clear that the poster, and Lipstick Under My Burkha itself, is about a much bigger societal issue. She is said to have told a leading daily, “I have no issue with CBFC. My problem is with the society, which talks about the same thing but in its own way. So, CBFC is mirroring the society. We will trivialise this whole thing if we make it about CBFC. It’s a larger issue. If you talk to a woman she will give you at least five incidents in a day, 5-10 a month for sure where she had to give proofs of being a ‘woman’, maybe in a male-dominated work place or when she has to try to come across as a smarter because she is good looking.” (sic)

“There are many such instances and women learn to combat them from a very young age. So, this finger, this lipstick is for the society that doesn’t allow us to come out and curbing our voice. So, it’s not about CBFC. It’s about an ideology, it’s not about men again. I am going to do a campaign, ‘lipstick for men’. There are a lot of men who have made us the women we are today, like my father. There are many women who want a son to be born, and hence put their daughter-in-law through abortion. So, it’s about the ideology, not men and women.”

She continued about why she feels so much for this film and why she is eager to showcase it to the Indian audience. “When I went to watch it, I thought it would be pretentious, very arty… But after I saw it, I felt it was a stark entertaining film. It was right there, staring me in the face and I never had a more honest conversation with myself that I had after watching the film. We are so scared to feel, that now it is our second nature to be shy about our sexual fantasies and sexual desires. The film stared at me and asked me a question. As a producer you have made financial decision but it’s time that as a woman you made a decision from your heart and I did that.” (sic)