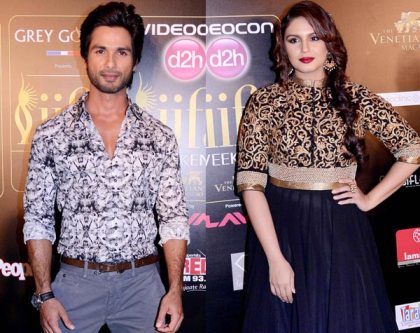 Bollywood stars are used to controversies stirred up by the media, usually involving another person and a potential romance. The most recent victim of such controversy is actor Shahid Kapoor, who came forward and denied that he is seeing actress Huma Qureshi.

The Jab We Met actor claims that he just met the actress a couple of times and that he does not have any clue where these stories come from. At the moment, Kapoor is considered to be the most eligible bachelor in the industry and for a while there have been rumors about his link up with Qureshi.

Shahid is constantly stalked by the media, due to which it has become difficult for the actor to go out with any female friend to a public place like a cinema or a restaurant. Spokesperson for Shahid clarified, “Shahid had a very strong female following right from his first film. His boyish charm, attract umpteenth link-up stories, whenever he is spotted with a girl.”

The spokesperson went on to say that Shahid has met the actress socially and briefly exchanged pleasantries. Moreover, the actor has been involved with work with no time left for himself.