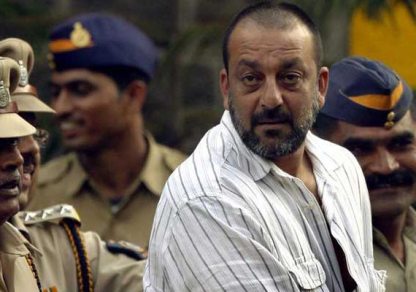 BollywoodGaram..com: Bollywood’s favorite ‘Munna Bhai’ might be in fulfilling his sentence in the Arms Act case at Yerwada Prison in Pune, but is still remembered by his fellow co-stars as he spends his 54th birthday on July 29, 2013. Letters were posted to the actor in prison which reached him on his birthday.

Some of the close friends of the actor revealed that many  Bollywood stars wanted to wish him on his birthday as they wanted him to know that he is still remembered and is missed . As of now, writing letters is the only way to communicate with him and greet him.

It was also said that it is very unlikely that Sanjay will be visited by his family as visits are restricted to just once a month and the next meet is due in the month of August. Reports have revealed that some of Dutt’s close friends and co-workers from the industry have addressed letters to him and have sent them to his wife Maanyata before they were posted to Sanjay.

Even Maanyata celebrated her birthday on July 22, 2013 and Sanjay plucked a rose from the jail garden, dried it between the pages of a book and sent it along with a poem that he had written for her.