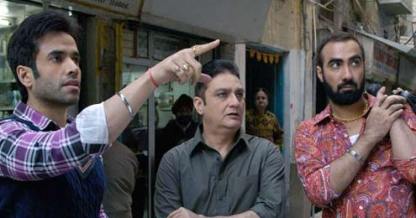 Filmmaker Sushant Shah has come up with his third movie, after he directed Lara Dutta-starrer ‘Challo Dilli’ and ‘Dasvidaniya’. After his latest movie was released, it has received mixed response from the audience.

‘Bajatey Raho’ tells a story of a con man named Sabharwal – played by Ravi Kishen – who tricks people by planning out various plots in order to drain money from them. The story then takes a different turn, as Sabharwal gets trapped when Baweja – played by Yogendra Tikku – suffers from a cardiac arrest after he is wrongly framed in a bank fraud.

Shah is well-known for making movies which are according to the pulse of the audience and he also manages to create an interesting plot, despite the fact that the platform is boring. The only thing that went wrong is that the makers have not worked enough on, or polished the script. Some of the scenes seem loosely written with ill-fitting dialogues and that takes away the entire effect.

The first half of the movie also seems sluggish and the pace picks up too late. Overall, the movie can be watched if you are ready to have a few laughs and be entertained. Here is the trailer video for the new movie.