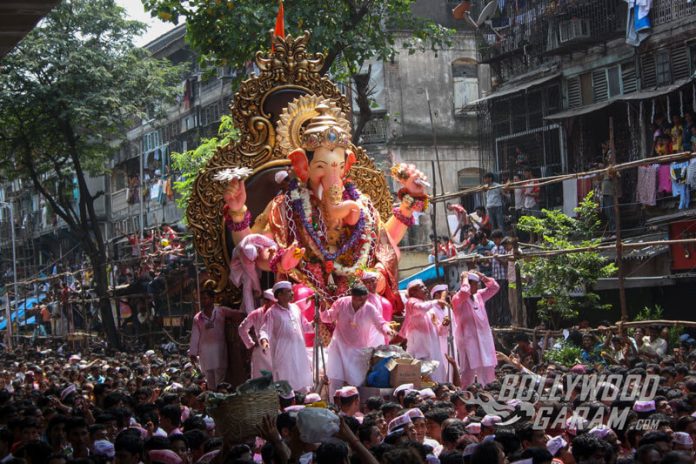 In what will be a first, Salman Khan will not be welcoming Ganpati to his Galaxy apartments among traditional drum beats and high-pitched chants of Ganpati Bappa Morya this year

As the country preps up for a colorful and devotional Ganesh Chaturthi this week, Salman Khan too is ready to welcome the modak-lover, Ganesha albeit not at his home, unlike what he has been doing for the past 14 years. Khan has been ardently celebrating the Ganesha festival at his home in the Galaxy Apartment, Bandra. However, this year, Khan will worship the Ganpati at his sister, Arpita Khan Sharma’s home changing the norm after more than a decade.

Each year, either in Salman’s presence or absence, Ganesh Chaturthi is celebrated at his place however, this year when the actor is expected to be in Mumbai during the festival time, it is speculated that due to ongoing renovations in his Bandra house, the Khan family will continue with their spectacular celebrations at sister Arpita’s Bandra home.

As one of the leading dailies report, the plan was to worship Ganpati at Khan family’s farmhouse in Panvel, but since it would be a problem for their relatives and friends to turn up for the celebrations at Panvel, the venue has been shifted to Arpita’s abode where she lives with her husband, Aayush Sharma and her little one, Ahil Sharma.

On the contrary, there have also been reports suggesting that Arpita’s house was chosen for the festival celebrations as she will be there throughout, even when Salman would be busy shooting for his film, Tiger Zinda Hai in Abu Dhabi, UAE.

Ganpati is worshipped in Mumbai over a period of either one and a half day or three, five, seven or eleven days depending on the conveniences, tradition and determination of a family. Going by the reports, Arpita might be having the Ganpati idol at her home for three whole days. However, Salman’s presence at the festival this time is doubtful, given his shooting schedules. Last year, he could not be present when the celebrations were on at his Galaxy apartment owing to his film, Tubelight’s shooting in Manali that did not fare well at the box office.