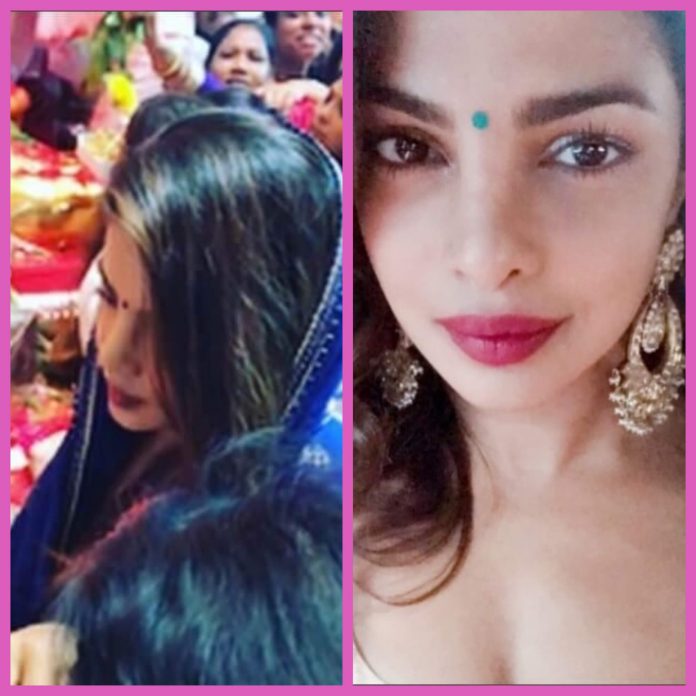 Priyanka Chopra relives old days with friends and celebrates Ganesh festivities with them by visiting the famous Lalbaugcha Raja Ganesh idol in Mumbai.

Ganesh Chaturthi is a festival close to Mumbaikar’s lives and the same is true even with celebrities. Bollywood celebrities and popular figures like Karan Johar, Manish Malhotra, Sanjay Dutt and Mukesh Ambani have been seen celebrating the festival in their own special ways at their residences this year while actors like Ajay Devgn offered his prayers to the famous Lalbaug Ganesh idol – one of the biggest Ganesh pandals in Mumbai. This weekend, it was Bollywood actress, Priyanka Chopra’s turn to celebrate the Ganesh festival in her own way. Chopra has lately been quite the Hollywood sensation with her movie Baywatch and her performance in the web series, Quantico saw her being awarded and acclaimed.

She is now spending some quality time with her friends back home and keeping it simple with her day out at Lalbaugcha Raja for Ganpati bappa’s (Lord Ganesha) darshan. Chopra spent this weekend seeking blessings from Lord Ganesha and later clicked pictures with her friends enjoying the cool breeze at the Marine Drive.

She posted the pictures on her Instagram account which have already garnered more than 3,50,000 likes, further highlighting the significance of the Ganesha festival and Lalbaugcha Raja’s Ganpati puja celebrations in a Mumbaikar’s life. Chopra turned out to be that Mumbaikar this weekend amid Mumbai monsoons enjoying her darshan time and later reliving the days of her past with friends – something her otherwise busy schedule shuttling between Bollywood and Hollywood film projects don’t seem to let her the time for.

It’s been years since I’ve just sat by the ocean at Marine drive.. used to be one of my favourite things to do when I modelled.. I guess In the hustle bustle of life we just don’t pause to feel the breeze..the beautiful #queensnecklace? Just .. #simplepleasures #PostDarshanChill #incognito #midnightTafree #mumbairomance @tam2cul @sudeepdutt @mushtaqshiekh #mumbaijourney #17yearsandcounting #nostalgic

The popular global icon is currently working on two Hollywood films – A Kid Like Jake and Isn’t It Romantic. She has been reportedly looking forward to filming her upcoming Bollywood project, Gustakhiyan produced by Sanjay Leela Bhansali whose directorial venture, Bajirao Mastani was Chopra’s last Bollywood flick so far.