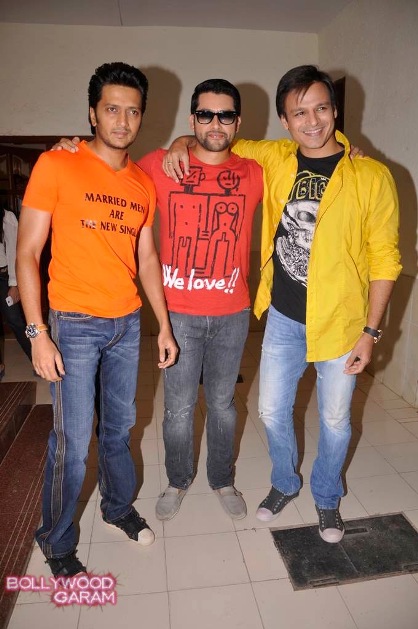 BollywoodGaram.com: Bollywood trio Riteish Deshmukh, Vivek Oberoi and Aftab Shivdasani, who became popular with the movie ‘Masti’,  are all set to entertain the audience once again with its sequel ‘Grand Masti’. The three actors were present at an event at Radio City 91.1 FM studios in Mumbai on August 12, 2013, during the unveiling of the upcoming Bollywood film’s poster and their music launch.

While talking about the music in the movie, the ‘Tujhe Meri Kasam’ actor Riteish Deshmukh said that in ‘Grand Masti’, every scene is an item with a punch. This was the reason why they wanted music which would go well with the movie and it will be exciting for the audience to hear it. He added that during the movie’s shooting, not only actors, but even the crew started dancing as soon as the songs were played.