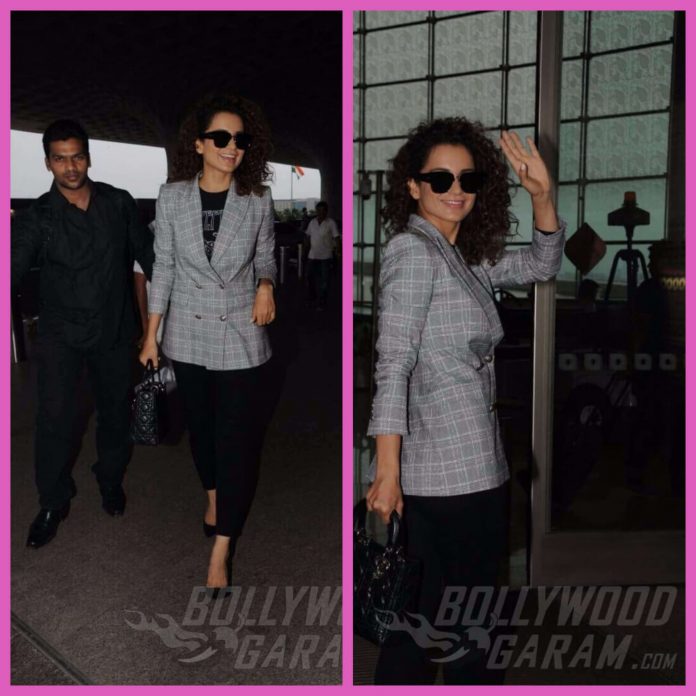 Bollywood’s Queen Kangana Ranaut sure knows how to put up her stylish and confident best wherever she is spotted. Promoting her upcoming release, Simran, Ranaut is having a busy schedule these days and was snapped at the airport while leaving for Ahmedabad in a chic look wearing a printed T-shirt, black pants and a grey striped smart blazer. To complete the look, she wore black glares, carried an elegant black handbag and matched it with pointed black heels. She has sported the badass casual look before too and can be safely said to have mastered it.

In her new movie Simran that is scheduled to release on September 15, 2017, Ranaut plays the role of a kleptomaniac and is a Gujarati NRI in the United States working as a housekeeping staff in a hotel.

Ranaut has been taking the internet by storm with her heated revelations, allegations and demands that she has made in relation to Hrithik Roshan. The row between the two actors has over the past year garnered heavy attention from the Indian masses and still continues to make headlines with her recent demands of an apology from Hrithik and his father, Rakesh Roshan for reportedly causing her ‘mental and emotional trauma’ that stemmed from the alleged ‘intense humiliation’ that she said to have underwent at an interview with a popular TV show, Aap ki Adaalat with Rajat Sharma aired on a Hindi news channel.

Since Ranaut’s episode on the show was aired, industry insiders like Sona Mohapatra and Farah Khan have taken digs at her and either accused her of “washing her dirty linen in public” or asked her to stop playing her “woman card.”

Meanwhile, the Tanu Weds Manu Returns actress is also filming another upcoming flick, Manikarnika – The Queen of Jhansi as she awaits Simran’s release, a film helmed by director Hansal Mehta.