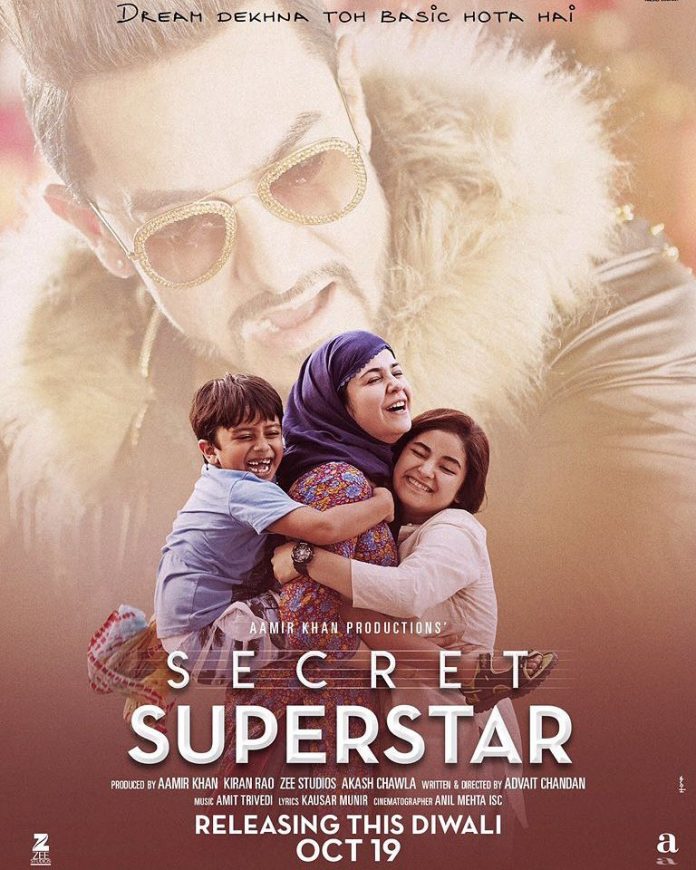 Aamir Khan’s upcoming movie, Secret Superstar deals with the story of an aspiring singer with Zaira Wasim in the lead

Aamir Khan shared a new poster of his upcoming film Secret Superstar which has Zaira Wasim playing the lead role. Zaira and Aamir had featured in the earlier film Dangal which did wonders at the box office and now the expectations are high with Secret Superstar.

The poster on Aamir’s Twitter account has a huge yet blurred picture of Aamir at the background and a family picture with Zaira’s character hugging her mother and brother. The Taare Zameen Par actor captioned the image, “Our third poster. PS: Our second song comes out today at 6pm.”

Our third poster. Love. a.

PS: Our second song comes out today at 6 pm. pic.twitter.com/rOQQEjmD7q

Aamir will be seen in a supporting role and has also produced it. The actor is highly impressed by Zaira and her acting skills and said in a statement, “Zaira does not have any connection with music, like she did not have any connection with wrestling while doing ‘Dangal’, but she trained for wrestling for ‘Dangal’ and for ‘Secret Superstar’, she has learned guitar, which is a big work.”

Secret Superstar is a story about a teenage girl, who wishes to become a singing superstar but faces a backlash from her father. The film is produced under the Aamir Khan Productions and is written and directed by Advait Chandan. Secret Superstar is ready to be released on October 19, 2017.