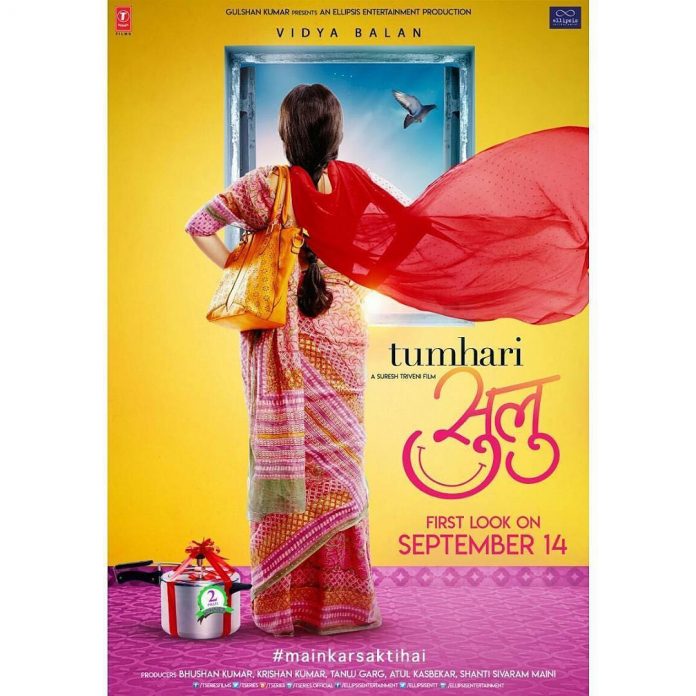 Makers of Tumhari Sulu released another poster of the film. Lead actress Vidya Balan’s face is again not seen. The new poster has shown the character Sulochana, also known as Sulu, looking out of the window with a gift wrapped pressure cooker by her side.

Vidya in the poster can be seen wearing a simple sari while carrying a hand bag on her shoulder and shows the tagline #Main Kar Sakti Hai (I can do it). Tumhari Sulu is an upcoming comedy-drama directed by Suresh Triveni and also stars Neha Dhupia and Manav Kaul in important roles. The story of the film is about a middle class housewife based in Mumbai, who bags a job of a radio jockey. Her routine life changes when she gets an opportunity of being a night radio jockey at a leading radio station.

Suresh in an earlier interview talked about the film and said, “Middle-class housewives have been portrayed as hassled and troubled in Hindi films, but I’m a huge Hrishikesh Mukherjee fan and he showed that even middle-class families can be happy. I want the audience to walk out with a big smile on their face.” The makers have also recreated the popular song Hawa Hawai from the film Mr. India.

On the work front, Vidya was last seen in the film Begum Jaan in which she played the role of a prostitute. It will be interesting for the audience to see Vidya playing the role of a middle-class woman based in Mumbai. Balan has several times shown her versatility on screen by playing different kinds of roles in Bollywood. The Parineeta actress has earlier shown her skills in the genres of romance, thrill and drama. It will be good to see her performing in a comedy genre. On the personal front, the actress is married to producer Siddharth Roy Kapoor.