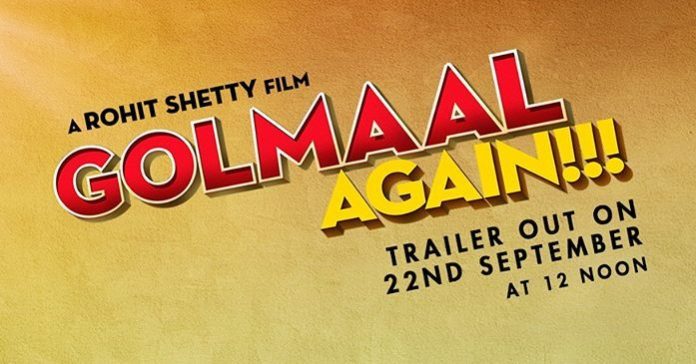 The wait is over as the makers of Golmaal Again have announced the release date of the trailer. Golmaal Again trailer is ready to be released on September 22, 2017. The film stars Ajay Devgn, Tabu, Arshad Warsi, Parineeti Chopra, Tusshar Kapoor, Shreyas Talpade and Kunal Khemu and is expected to be a laugh riot.

The trailer release date was announced by Ajay Devgn in a small video in which the Golmaal instrumental is played at the background with the text, “Iss Diwali Logic Nahin Sirf Magic. Trailer releasing on September 22, 2017.” Parineeti in an earlier interview said that she is looking forward to doing some good work. The actress had then said, “It is amazing to be a part of a film like this. It’s a legacy (to take forward). Golmaal is a legendary series and Kareena has done two of them and now I am doing it. I hope I can do a good job.”

Gopal is back with his gang to entertain you’ll. Get ready for @GolmaalMovie #GolmaalAgain

Tusshar Kapoor and Ajay Devgn have been a part of Golmaal since a long time. This time a few new faces are expected to make things even better for the audience. Tabu and Parineeti are the new members on board and the film is ready to be released this Diwali on October 20, 2017.