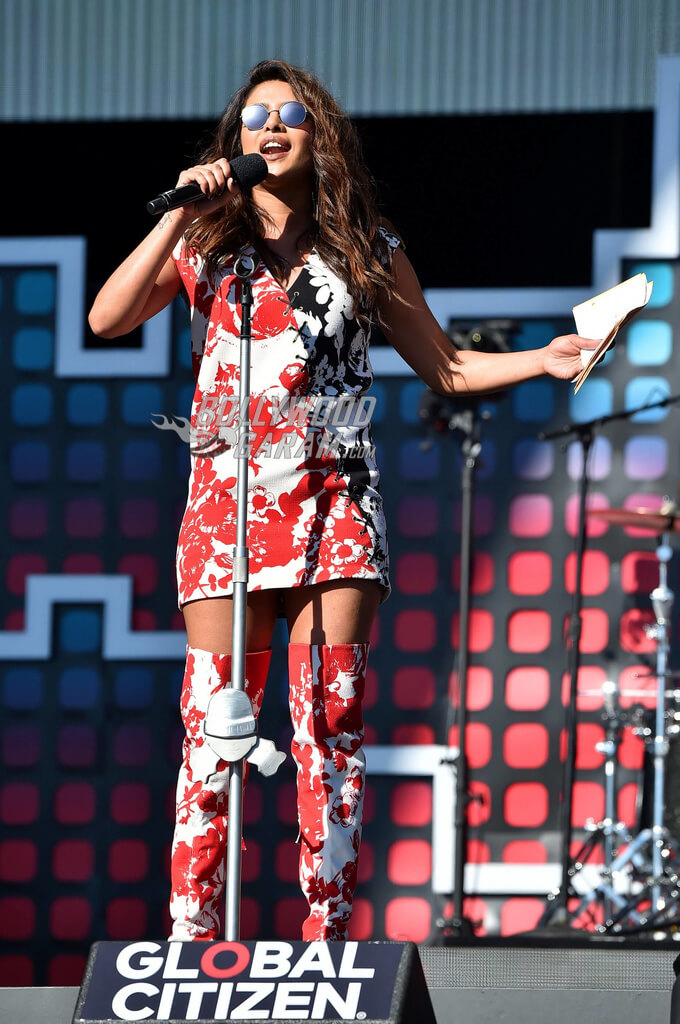 Priyanka Chopra is adding more feathers to her cap in a short time – from a Bollywood star, she has become a global influencer

Our desi girl seems to have been there and done it all! From being a Bollywood superstar to a Hollywood icon who started her journey in American movies with a TV series, Quantico and her role in Baywatch with Vin Diesel, playing the villain Victoria Leeds, to being UNICEF’s Global citizens Goodwill Ambassador and walking the red carpet at several grand international events like the MetGala, Emmy’s and Oscars to the more recent Toronto International Film Festival (TIFF) where she spoke about her production venture, Pahna: The Little Visitors, a Sikkimese film that got appreciated at TIFF, Priyanka has truly been a global citizen with #GlobalGoals.

Sunday, September 24, 2017, the Baywatch star hosted the Global Citizen Festival in a Fausto Puglisi dress with black and red floral patterns matched with thigh-high boots and round glares. She was quiet an enthusiastic and spirited host to the musical extravaganza that is an annual one-day festival in Central Park, New York held for the cause of battling poverty and inequality around the world.

Priyanka spoke to a massive crowd and posed for pictures with Oscar winner and Kenyan-Mexican actress Lupita Nyong’o who won the prestigious award for her stellar performance in Steve McQueen’s drama. Other celebs she was spotted with were actress Michelle Monaghan, Slumdog Millionaire star, Frieda Pinto, pop queen Demi Lovato, NYC Mayor Bill De Blasio and actor Kal Penn who was dressed in a shark outfit.

PeeCee’s style quotient has always been on point – she initially was seen in a Global Citizens’ tee and dark blue jeans, but her floral shift dress that she later changed into made her presence felt more at the international event.  The Chainsmokers, punk rockers Green Day, Stevie Wonders’ hours-long musical performance and The Killers were some of this year’s acts.

Exclusive photos of the Quantico star at the Global Citizen festival!