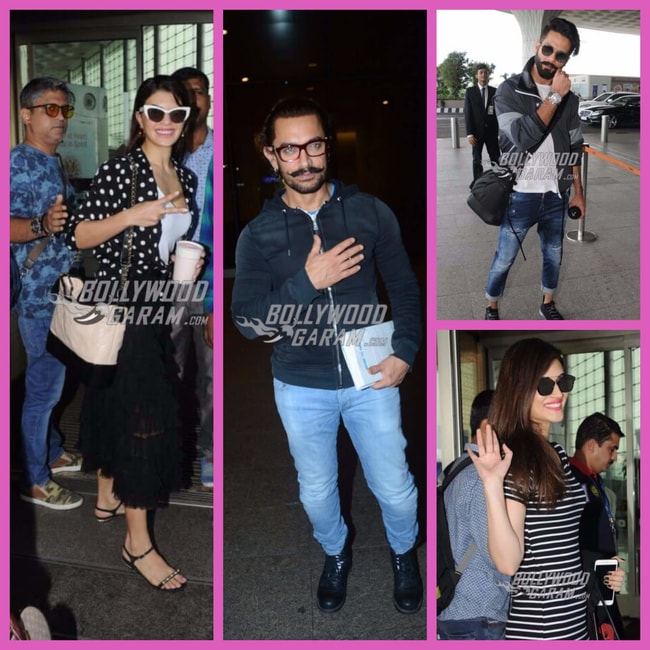 Aamir Khan, Jacqueline, Shahid Kapoor and Kriti Sanon are some of the busiest Bollywood celebs spotted in the city while travelling

Navraatri brings some opportune moment for the Bollywood celebs as they are seen promoting their films in festive style. While Varun Dhawan and Taapsee Pannu were seen celebrating Navraatri nights in Ahmedabad, Gujarat by playing dandia while promoting their upcoming release Judwaa 2, Aamir Khan returned to the bay after playing his first Garba in Vadodara. The Dangal actor who is now busy with his film, Secret Superstar’s promotions that is slated to release around Diwali enjoyed Navraatri with his Secret Superstar team at Vadodara where he promoted the film too during the weeekend.

My 1st Garba in Vadodara! What an atmosphere! What a feeling! Thank you Vadodara ❤ pic.twitter.com/ZJS76fcjiT

While returning on Monday, September 25, 2017 night, he was spotted wearing a dark blue zipper jacket and blue denims. Aamir, who never fails to impress his audiences by donning new looks for most of his films was seen in his Thugs of Hindostan look with the moustache and piercings at the airport. He was seen carrying a book with him while making his way out of the airport. Smiling for the shutterbugs, the bespectacled Aamir looked dapper in his cool new avatar.

Another star who sported the cool filmy look was Shahid Kapoor who was snapped with his bearded look from Padmavati that he recently shared on his social media profile. The Jab We Met actor was seen playing with his moustache for the cameras as he walked in style wearing a cool white tee, a pair of blue ripped denims folded at ankles, a grey jacket, black sneakers and stylish glares.

Jacqueline, meanwhile, pulled off the retro look in a white tank top, frilled and long black tulle skirt and a polka dot top knotted at her waist with cat-eyed white-framed glares to complete the 70s style. Her white purse, pearl-studded sandals, side-parted sleek hair and golden hoops further complimented the look. The A Gentleman actress who is currently busy promoting her upcoming film Judwaa 2 was on her way to Delhi (again for the film’s promotions) when she was snapped at the airport.

The fun of star-spotting at the airport spilled into the next day as well. Kriti Sanon and Ameesha Patel were spotted making quite the style statement at the airport on Tuesday, September 26, 2017. Kriti was wearing a striped black and white maxi dress with big, black glares, monochrome sneakers and a snazzy brown bag with cool stickers. She was seen carrying a black jacket as well as she smiled, waved and posed for the shutterbugs before making her way towards the airport entrance. Her glam looks have been on point, be it on red carpet, during brand endorsements and launches or at the airport.

Ameesha too looked fresh in her all-white ensemble – a zipper jacket and track pants along with white shoes. What added a pop of colour was her funky printed bag and her black smart glares.

Check out these exclusive photos of Bollywood celebs at the airport!