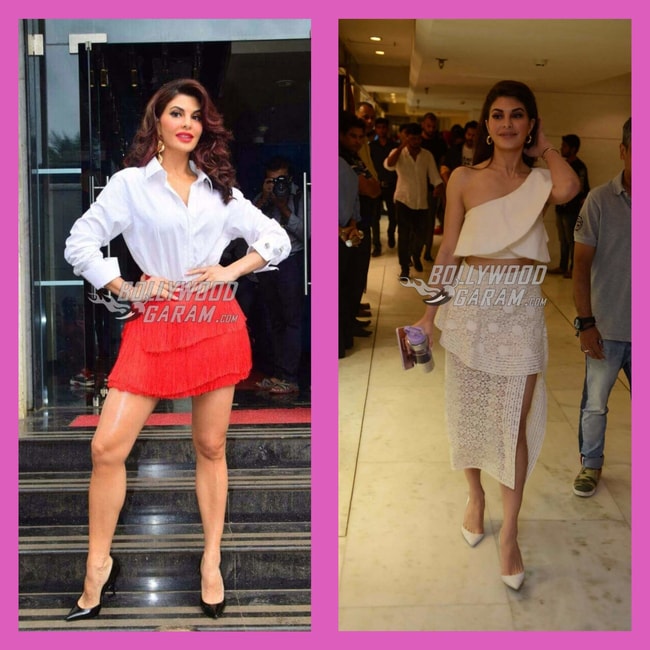 Jacqueline has upped the fashion ante each time with her high-spirited presence and on-point fashion sense, giving some major fashion goals

Judwaa 2 is one of the most eagerly awaited films that is expected to garner some major box office collections and rave reviews. Helmed by David Dhawan and a remake of Salman Khan-starrer cult film, Judwaa, Judwaa 2 will star son Varun Dhawan with co-stars Taapsee Pannu and Jacqueline Fernandez.

With the film’s release date inching close, the lead actors have been busy promoting the film on popular TV shows, promotional tours and events where they had fun hosting these shows and interacted with the audiences while promoting the upcoming film as well. Not only through these promotions, but the recreation of chartbuster magic with reprised versions of Oonchi Hai Building and Tan Tana Tan, the film has already piqued the interest levels and inquisitivenss of the movie-goers. What has been making news apart from the movie’s advance bookings that are already underway and are expected to propel a grand opening on the film’s release date (reports predict the movie will touch a whopping 10 crore on its opening day), that is on September 29, 2017, are the fashionable attires donned by the lead actors ahead of the release.

Here are some of the most sought-after and impressive looks of Jacqueline Fernandez from the film promotions:

For promotions of the reprised version of the song, Oonchi hai building…lift teri band hai in Judwaa 2, Jacqueline, Varun and Taapsee were seen inside an elevator posing and smiling for the paparazzi, all geared up to interact with the media on the song and the upcoming film. Jacqueline wore a dazzling metallic pink and silver skirt and a graphic top tied in a knot at her waist for a trendy look. She completed her attire with purple-colored round sunglasses and black heels. Quiet the girl-next-door image with a pop of sizzle over there!

The trio was headed towards Radio Mirchi studios and were snapped posing excitedly, with Jacqueline pouting in her red lips and being her usual cheerful self.

When leaving for promotional tour in Kolkata

Jacqueline, Taapsee and Varun were snapped at the airport when they were leaving fir Judwaa 2 promotions in Kolkata on September 19, 2017. The A Gentleman actress looked peppy and jovial in a black ensemble – a t-shirt and jeggings with a dash of color in her long floral-printed jacket. Matching round glares and pink footwear with a bow made her look geared up for the journey ahead.

On Dance Plus 3 sets

The trio did not seem to leave any stone unturned when it came to Judwaa 2 promotions. They hit the small screen in an episode of Dance Plus 3 with a lot of excitement, thrill and energy taht not only showed in their active participation in the show but also in their choice of clothes for the evening. Jacqueline opted for a vibrant red short skirt teamed up with a white silk shirt folded at the elbows with dangling golden earrings and black pumps.

The trio dressed themselves up for the Navratri and sported traditional attires for a garba dance. Jacqueline’s pretty fashion sense however stood out as she was seen wearing a minty blue colour lehenga with intricate floral prints and a soft pink net choli along with it. Her pretty pink earrings were not to be missed!

Experimenting with trends and different looks is something that comes naturally to Jacqueline, it seems. On her way to Delhi for Judwaa 2 promotions, the actress made a dramatic entry at the airport sporting the retro style white tank top, frilled black tulle skirt and a polka dot top knotted at her waist with cat-eyed white-framed glares to complete the 70s style. Her white purse, pearl-studded sandals, side-parted sleek hair and golden hoops further complimented the look.

In Delhi, the trio seemed to have a blast when promoting the film. They made faces at each other, posed for selfies and gave those cool, young vibes through their casual chic looks. Jacqueline was seen sporting a white top with a pink suit and matching stylish pumps. The smart and classy look on her went really well and her elegant and fun poses for the cameras topped it all.

On September 26, 2017, Jacqueline was spotted in Le Meridien Hotel in Delhi with her Judwaa 2 co-stars, Taapsee and Varun for the film promotions. She was a vision in white with a one-shoulder layered white silk top teamed up with a white skirt beautifully embroidered in floral patterns that had a frontal slit paired with white pumps, nude lips and highlighted eye-makeup, not to forget her golden hoops.

Namoshkar Kolkata. The judwaa2 crew is here. Raja has come with one student and a teacher @jacquelinef143 @taapsee. Wearing my new #idee glasses

In Kolkata, the Judwaa 2 team got into their characters in the movie, where Varun was seen donning his double roles, Taapsee turned into a student and Jacqueline efficiently portayed herself as a teacher wearing a printed beige sari with matching blouse and a belt tied at the waist to give a modern look to the traditional attire.

A high-spirited performance needs a trendy and vibrant look to go with it and with Jacqueline as the diva, one should never expect otherwise. When dancing to the tunes of their songs from Judwaa 2 and promoting the film, the trio set the stage ablaze with their magic. Jacqueline didn’t leave this fascinating opportunity to make a stylish appearance in an elegant black dress and a trendy, sleeveless and long yellow jacket with braided hair and hoops paired with black heels.