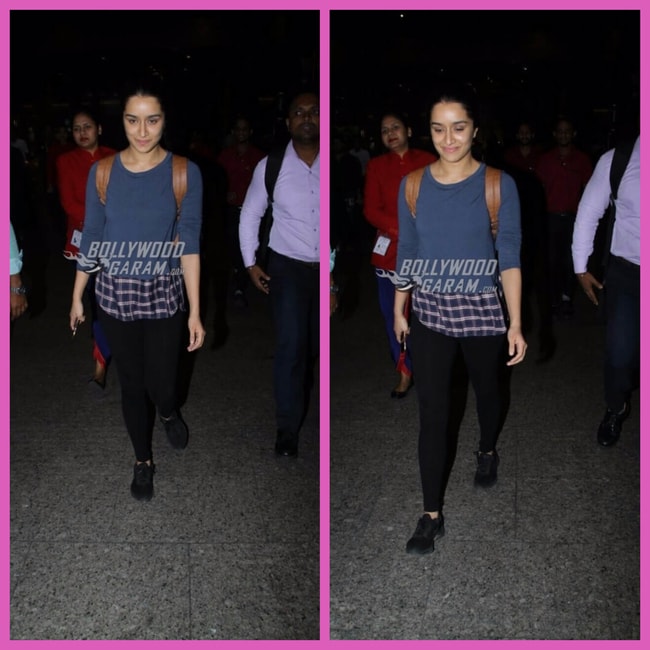 Shraddha Kapoor had actively promoted her last film, Haseena Parkar ahead of the film’s release in September

Shraddha Kapoor has been snapped frequently by the paparazzi bust at promotional events, trailer launches, airports and the like. She was spotted at the aiport on October 11, 2017 while returning from her first shoot schedule at Hyderabad for Saaho where she will be paired opposite south Indian actor, Prabhas of Baahubali and Baahubali 2 fame. The Half Girlfriend actress was wearing a casual blue striped shirt, a blue pullover and black pants with black sneakers. She completed her casual look with a brown satchel bag and minimal make-up and smiled for the cameras.

Shraddha Kapoor’s last Bollywood appearance was in the film, Haseena Parkar that released on September 22, 2017 and performed decently at the box office with reportedly a little over six crores within its opening weekend. This movie especially showed Shraddha’s acting prowess as it showed her in a de-glamorized role contrary to her girl-next-door image that she had been pulling off so far with her movies like Aashiqui 2, Half Girlfriend and Ek Villain among others. In Haseena Parkar, Shraddha essayed the role of famous gangster, Dawood Ibrahim’s sister, Haseena Parkar along with her brother Siddhanth Kapoor who played the role of her reel-life brother, Dawood too in the film. Her husband, Ibrahim Parkar’s role in the film was played by Ankur Bhatia.

Shraddha’s earlier interview with a leading agency quoted her as saying, “I have played the role of Haseena to the best of my ability. I loved the story. It’s a real life character, who has suffered so much loss in her life. The film was challenging for me.”

The movie, however, clashed with Sanjay Dutt’s comeback film, Bhoomi with Aditi Rao Hydari and Newton starring Rajkummar Rao that has made an official entry in the Oscars.

Shraddha has Saina Nehwal’s biopic too along with Saaho in the pipeline.

Exclusive photos of Shraddha Kapoor at the airport!