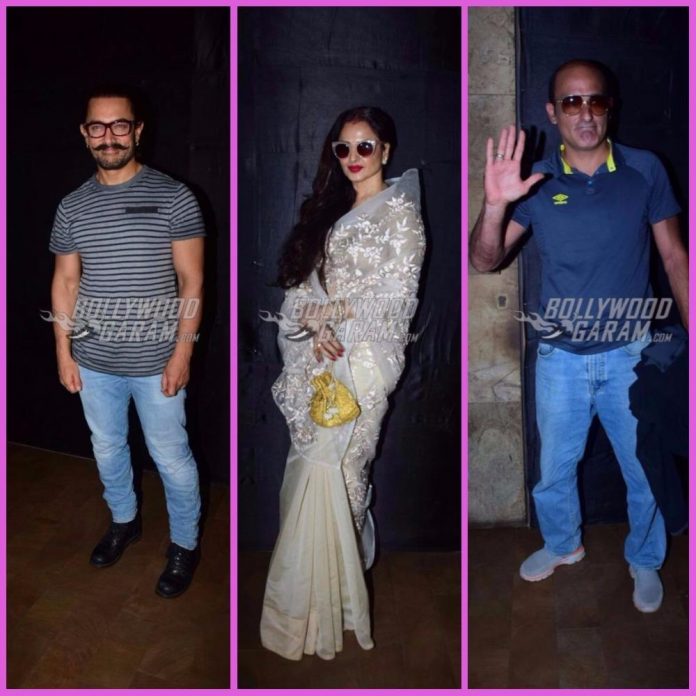 Ahead of Secret Superstar‘s release, Aamir Khan has been up and about with the film’s promotions

Celebrities from Bollywood attended the premiere of Aamir Khan’s much-awaited film Secret Superstar in Mumbai on October 17, 2017. The grand premiere event saw the presence of veteran actress Rekha along with Aamir Khan, Akshaye Khanna, Salim Merchant, Sharman Joshi with his wife and others.

The upcoming film is ready to be released on October 19, 2017 which marks the Indian festival of Diwali. Reviews have already started pouring in and the audience cannot wait to catch the film in theatres. The upcoming film has Zaira Wasim and Aamir Khan playing the lead roles with Meher Vij playing the role of Zaira’s character Insia’s mother.

The story of Secret Superstar is about a 14-year-old girl who is passionate about singing and wishes to reach out to the world with her voice. However, due to lack of support from her father, Insia decides to create her own YouTube channel. Insia then posts videos of her, but keeps her identity anonymous. The film is directed by Advait Chandan and produced by Aamir Khan and Kiran Rao.