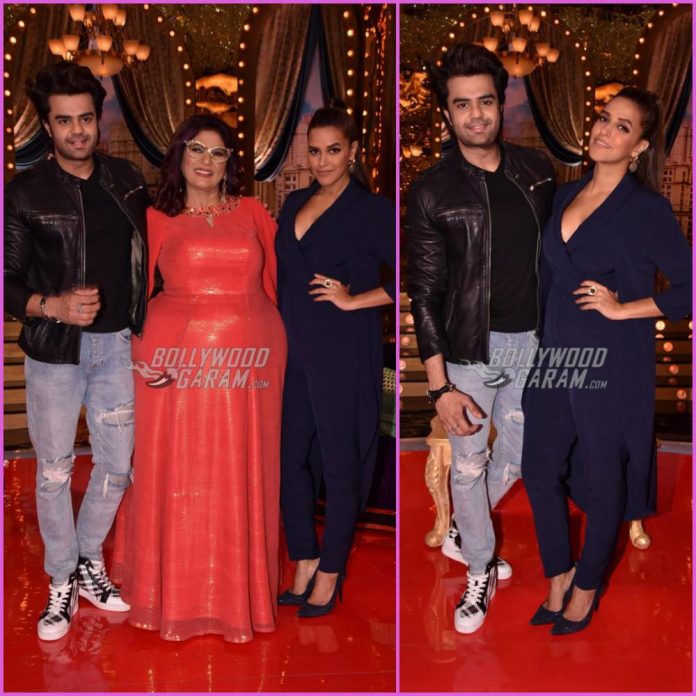 The show, Aunty Boli Lagao Boli is becoming popular everyday not just among the audience but also among the celebrities. Neha Dhupia and Maniesh Paul were the latest guests on the show hosted by Archana Puran Singh on November 5, 2017. Manish who has always spread magic as the host was equally entertaining as a guest. Neha played the perfect entertaining partner to Maniesh and looked gorgeous in a blue jumpsuit.

The audience was treated with some fun moments from the sets with a Golgappa contest among the guests while the viewers bidded for a car. Maniesh, Neha and Archana together put up a great show together. The episode was aired live on November 5, 2017 on Colors Channel. Neha Dhupia will soon be seen in the upcoming film, Tumhari Sulu which also stars Vidya Balan and RJ Malishka. The film is ready to be released in theatres on November 17, 2017.

The show Aunty Boli Lagao Boli is an interactive game show which is aired live and is promoted by Raj Kundra and Shilpa Shetty. The viewers can bid for a brand new car from the comfort of their home and the person who places the lowest bid will win the brand new car. The winner’s name and picture flashes live on Colors TV. The show is hosted by Archana Puran Singh and every week celebrities visit the show to keep the audience and viewers engaged.