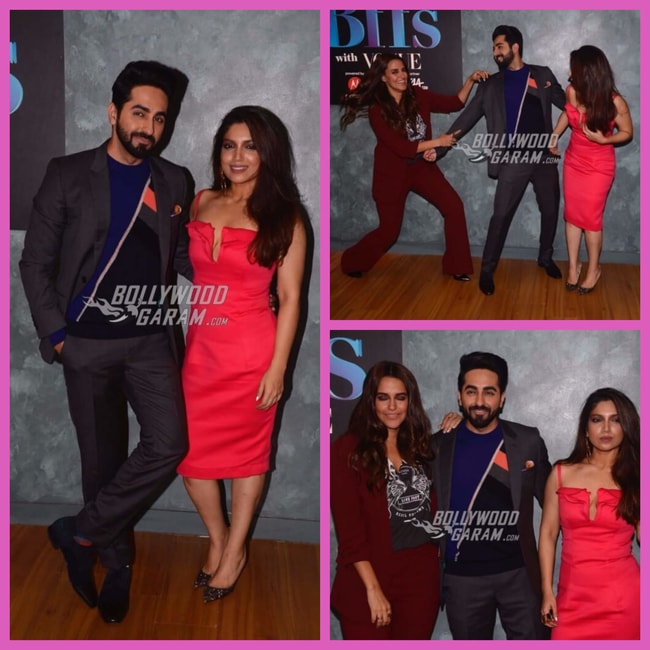 These two Bollywood actors have been appreciated for the roles that they play, their affable chemistry with each other and the powerful message of a film that they effortlessly convey through their performances. Ayushmaan Khurana and Bhumi Pednekar were seen on the sets of the chat show, Vogue BFFs with the host Neha Dhupia. While Ayushmaan looked dapper in a printed t-shirt teamed up with a grey suit and formal shoes, Bhumi looked nothing less than a style diva in her fuschia pink dress and shimmery footwear. She rounded off the look with golden danglers and open hair.

Neha too rocked the suit look in a wine red suit teamed up with a printed grey top and black pumps.

Bhumi started off her Bollywood career in 2015 with Dum Laga Ke Haisha opposite Ayushmaan Khurana that received a good box office collection and applause by the critics for showing a path-breaking concept of an educated overweight girl as a bride, debunking stereotypes of the typical Bollywood heroine.

They were next seen together in Bhumi’s third Bollywood film, Shubh Mangal Savdhaan that released on September 1, 2017 which again was both a critical and commercial success. Both Ayushmaan and Bhumi have risen to prominence because of their choice of movies with a difference – either conveying a social message around a taboo topic through comic timings and dialogues (Shubh Mangal Savdhaan, Vicky Donor) or using both emotional and comical means to create awareness around a prevalent social malaise like Bhumi’s film, Toilet:Ek Prem Katha starring Akshay Kumar in the lead role that went on to become a huge success at the box office garnering more than rupees 100 crores.

The duo posed and smiled for the shutterbugs while at the set of Vogue BFFs and seemed to have a lot of fun while shooting the episode. Neha too posed with the Shubh Mangal Savdhaan stars.

While Ayushmaan will next be playing a visually challenged pianist in the upcoming film, Shoot The Piano Player, with Tabu and Radhika Apte playing pivotal roles in the film; Bhumi, on the other hand, will reportedly feature as a dacoit – Bhumi’s first in an action-oriented role, in her next film, Chambal, directed by Abhishek Chaubey and opposite Sushant Singh Rajput. Bhumi was recently quoted saying by a leading daily about Chambal: “It is a fantastic script.”

Exclusive photos of Ayushmaan and Bhumi for Vogue BFF shoot!