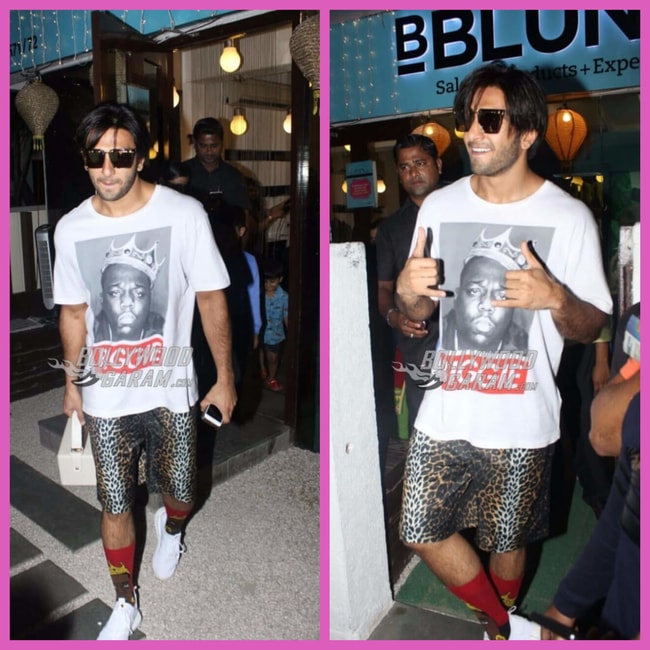 After the wrap of the shoot schedules for Padmavati, Ranveer has bid goodbye to his role of Alauddin Khilji as well by getting his long tresses chopped

One of the busiest Bollywood celebrities and a popular icon among the youth of the country, Ranveer Singh has been ruling the charts since the time of his Bollywood debut, Band Baaja Baaraat and there has been no looking back for Ranveer as he came to establish himself as a leading and prominent actor in the film fraternity. Ranveer was spotted in a new haircut and a stylish appearance outside BBlunt salon, Khar, Mumbai, where he rocked his look in a white printed t-shirt and animal print shorts, a pair of socks with funky animations and white sneakers.

He was seen holding a small vanity case and completed his dapper look with a pair of rectangular reflective sunglasses. The Bajirao Mastani actor posed for the cameras while a large crowd gathered for a glimpse of the star. Ranveer was seen happy and ‘in the moment’ when he made his way out of the salon with style and élan. He was almost mobbed by fans, who have especially been star-struck by him after seeing his appearance as Alauddin Khilji in his upcoming film, Padmavati’s trailer.

Ranvir’s long waves and beard with his intense gaze in Padmavati posters and trailer have taken some people by surprise while others have loved the look on him. However, the Lootera actor chopped off his tresses and shared a video of the process of haircut while in the salon on his Instagram account.

The shoot schedule was recently wrapped up and Ranveer posted on Instagram a sketch of himself as Alauddin Khilji and captioned the post, “And it’s a wrap!
Goodbye Alauddin. 1 year and a few weeks later, I bid thee farewell. May your restless soul find its peace…” #Khilji.

And it’s a wrap! Goodbye Alauddin. 1 year and a few weeks later, I bid thee farewell. May your restless soul find its peace… #Khilji

When speaking about the film, Padmavati and his role in the film in an earlier interview, Ranveer said to a leading daily, “It’s very difficult. It’s physically, emotionally, mentally very draining. It’s my biggest challenge yet as an actor. I prepared very hard for it, almost a month. We have started shooting and Bhansali is pretty happy with the way things have shaped up,” adding “I am at a very nascent stage of discovering this layered character. It’s a part of a lifetime and I hope I can do justice to it.”

That time is almost here when Ranveer’s role as Alauddin will be watched and analyzed by the audiences as the film is slated to release on December 1, 2017. Padmavati also stars Deepika Padukone as Rani Padmavati and Shahid Kapoor as Maharana Rawal Ratan Singh.