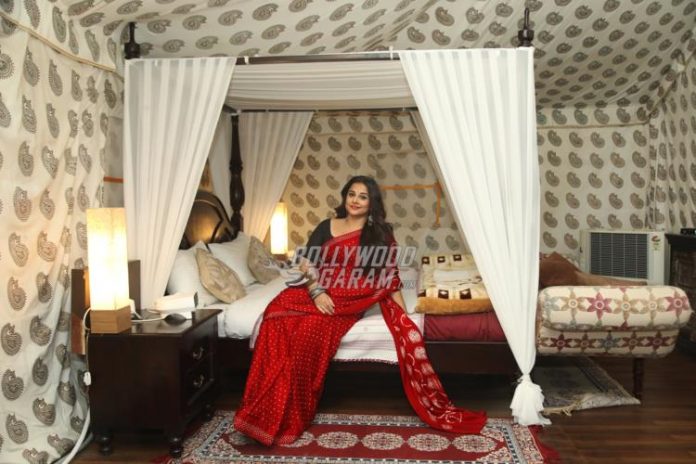 Vidya Balan is travelling to different places to promote her upcoming film, Tumhari Sulu. After spending time with the soldiers at the India-Pakistan border at Gujarat, the actress participated at the popular Rann Utsav in Bhuj. The actress who will be seen playing the role of Sulu was offered the ultra luxurious tent which is only given to Prime Minister Narendra Modi.

The tent where Vidya was lodged, was bullet proof and had a living room with sofas, television, multimedia players and two luxurious bedrooms. The suit also featured plush washrooms and two dressers. Balan during her visit to the Rann Utsav walked bare-feet among the visitors on the white sand desert.

After a long day of promotions of Tumhari Sulu, Vidya Balan relaxed at the bullet proof tent before she returned to Mumbai. Vidya while talking about her experience said, “The tent was beautiful. It felt like royalty and the service was impeccable.” The upcoming film Tumhari Sulu is directed by Suresh Triveni and also stars Manav Kaul, RJ Malishka and Neha Dhupia. Vidya will be seen playing the role of a middle-class housewife, who lands the job of a night radio jockey. The upcoming comedy-drama flick is ready to be released in theatres on November 17, 2017.