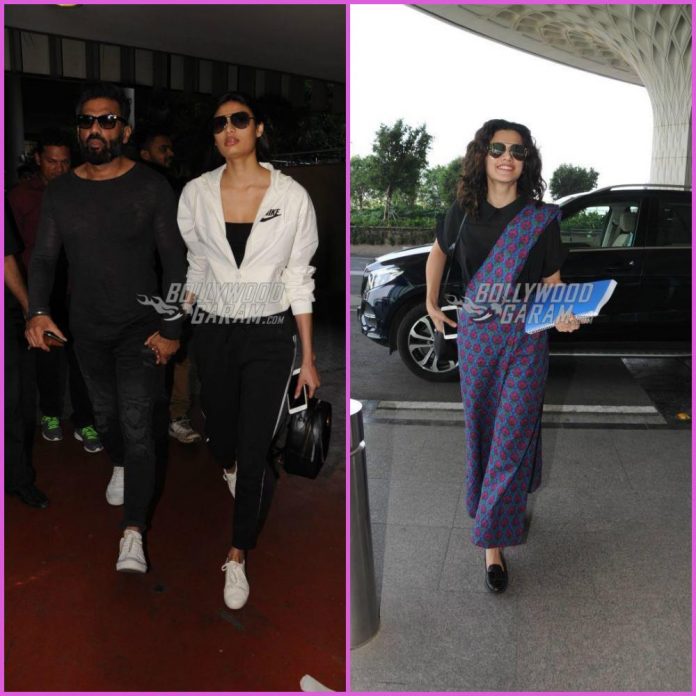 Bollywood’s father and daughter duo, Athiya Shetty and Suniel Shetty were clicked together at the Mumbai airport on November 13, 2017. Athiya and Suniel were seen walking hand in hand as they returned from Delhi and made their way through the airport. The airport also saw Taapsee Pannu, who was on a travel schedule as well.

The Mubarakan actress was seen in a sporty tank top, black track pants and white sneakers while father Suniel was seen in casual denims and a black pullover. Athiya was last seen in the film, Mubarakan, which did an average business at the box office and also starred Anil Kapoor, Arjun Kapoor and Ileana D’Cruz.

Taapsee, meanwhile, was seen in a trendy purple jumpsuit with brown shades. The actress was last seen in the film, Judwaa 2 which also starred Varun Dhawan and Jacqueline Fernandez. Taapsee has just wrapped shooting the upcoming film, Mulk, which is a social thriller that is based on real life struggles of common people. The actress will be seen playing the role of a lawyer.

Exclusive photos of Suniel Shetty and Athiya Shetty at the airport!