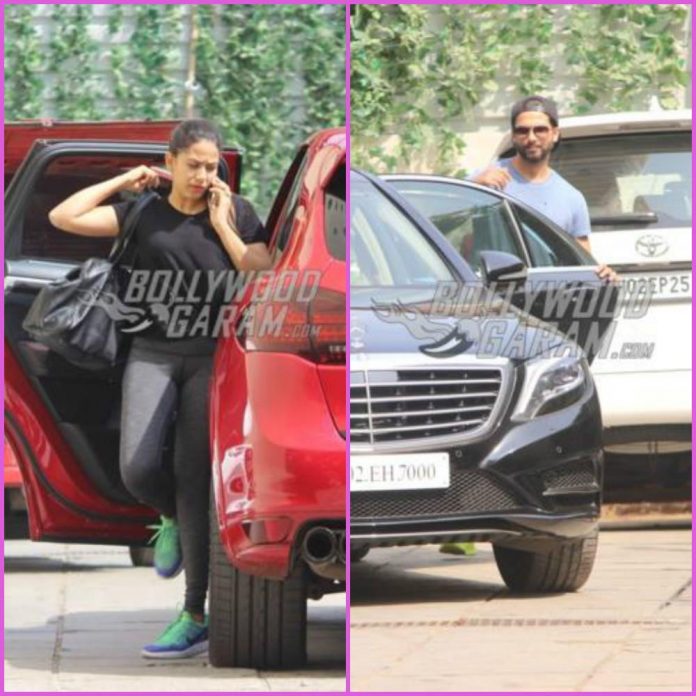 Shahid Kapoor and Mira Rajput have been regular to the gym together since they got married. Mira was snapped talking on her phone as she arrived at the gym and looked great in grey pants and black t-shirt. Shahid was clicked on another car in a blue t-shirt and black pants and waved for the cameras.

Shahid and Mira recently appeared on a cover of a popular magazine and got candid about their relationship in an interview. The couple talked about their equation with each other and how their lives changed after having their daughter Misha.

Shahid, while talking about his wife, Mira said, “She is the first girl I met, for marriage specifically. I mean, I was meeting a lot of girls organically – I was not in a boy’s hostel. I was living in Mumbai with my own pad, alone since I was 23. I was 34 when I met Mira and ready to grow up.” The Rangoon actor also shared how they started falling in love with each other as they were about to get married.

Mira added, “We are still falling in love, each and every day.” On the work front, Shahid is looking forward for the release of the Sanjay Leela Bhansali film Padmavati which also stars Ranveer Singh and Deepika Padukone. Shahid will be seen playing the role of Maharaja Rawal Ratan Singh. Padmavati is due to be released in theatres on December 1, 2017. The actor has also signed for another project Batti Gul meter Chalu by Shree Narayan Singh.

Exclusive photos of Shahid Kapoor and Mira Rajput at the gym!