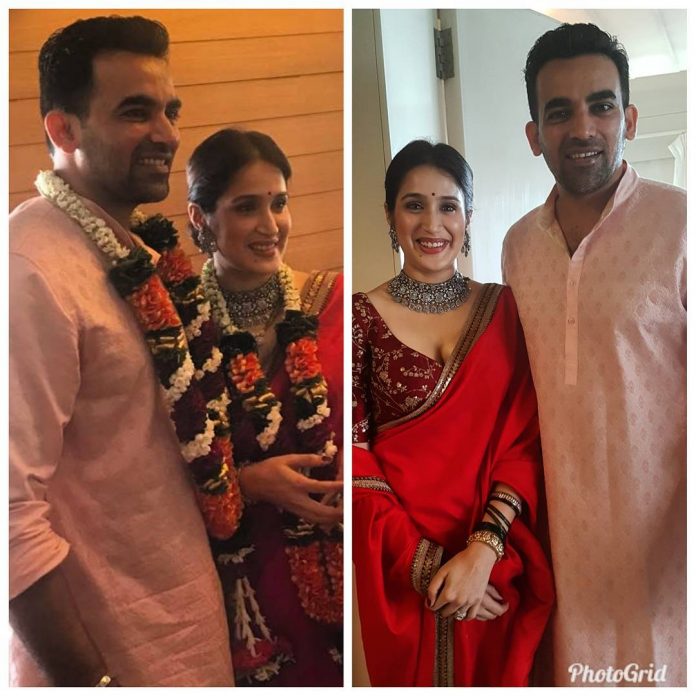 Bollywood actress Sagarika Ghatge and Indian cricketer, Zaheer Khan are officially married. The two opted for a court marriage on November 23, 2017 and a grand wedding reception will be hosted by the couple in Mumbai on November 27, 2017. The first pictures of the couple were shared by close friend Anjana Sharma on Instagram.

Sagarika looked pretty in an orange sari with a maroon embroidered blouse and completed her look with a beautiful necklace and a tight bun. Zaheer looked great in a pink kurta. The couple posed together and looked happy. Sagarika’s close friend, Vidya Malvade, who has also been her co-star in the film Chak De! India spent time with Sagarika a day before the wedding and shared a picture of the would be bride in fun mood.

Sagarika during a recent interview with a leading daily said, “Like everybody who is getting married, I think there is always stress, yet there is a lot of excitement because it’s a wedding that you are planning. So, we have all those emotions going on right now.” The actress made her debut in Bollywood with the film Chak De! India which also featured Shah Rukh Khan in the lead role. Sagarika has also featured in the films, Irada and Rush.