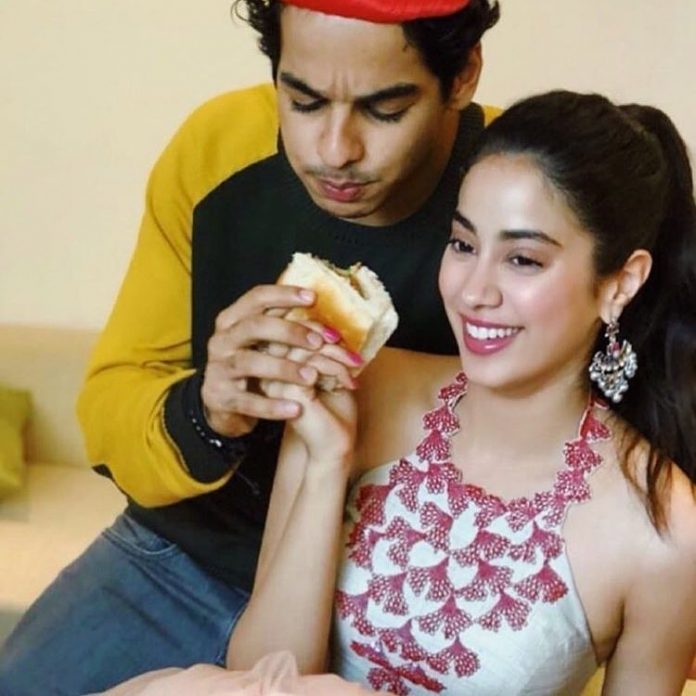 Young star kids Ishaan Khatter and Janhvi Kapoor are promoting hard their much awaited upcoming flick Dhadak. After travelling to Jaipur and Lucknow, the actors travelled to Pune for promotions of Dhadak. Lead actress Janhvi shared an adorable picture of her with her co-star Ishaan on her Instagram page.

Ishaan and Janhvi are seen indulging in the popular savory vadapav in Pune. Janhvi can be seen holding the vadapav while Ishaan is seen gorging in to it. The actress looks pretty in a pink lehenga while Ishaan can be seen in a black and mustard color t-shirt and blue denims.

While the film is yet to be released, the fans are already loving the chemistry of the star kids. Even off the cameras, the two look pretty comfortable and happy in each other’s company. Dhadak is directed by Shashank Khaitan and is the official remake of the Marathi film Sairat.

The story is about a young boy and a girl, who belong to different casts and fall in love with each other. Dhadak will be released in theatres on July 20, 2018. The Marathi version of the film had Rinku Rajguru and Akash Thosar in lead roles. The audience has high expectations from the Hindi version as well.