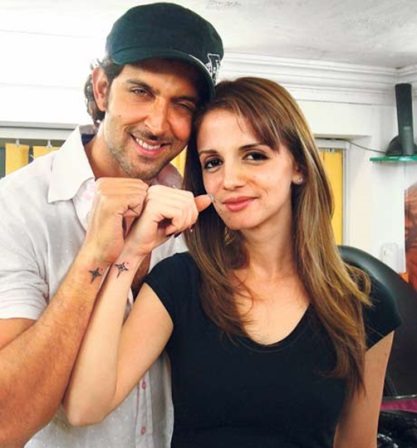 For a long time, there were rumors about cracks in the marriage of Sussanne Roshan and Hrithik Roshan. In recent times, rumors became even stronger, as reports of marriage troubles did not stop circulating, however, Sussanne’s sister Farah Ali Khan came to the rescue and clarified that the couple is not heading towards separation.

Khan took to her Twitter account to turn down constant rumors and wrote, “Celebrities will always be food for gossip. Don’t believe everything you read. It’s a pity the media lives off personal lives. Get a life!” To be even more direct, Khan tweeted a media story of Hrithik and Sussanne’s separation and wrote the comment: ‘NOT TRUE’.

The rumors of separation started when Sussanne made a quick exit from Rakesh Roshan’s birthday bash. After that, reports became even worse when the petite beauty went back to her parents’ house. Finally, the rumor mill went into overdrive when Sussanne was absent from the Ganpati Visarjan ceremony of the Roshan family.

Meanwhile, Hrithik also commented on rumors surrounding his marriage and wrote, “Just a thought – your life is less about you and more about the people around u who love you!” Hrithik and Sussanne are married for 13 years and have two sons.