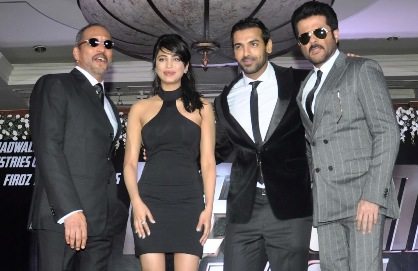 BollywoodGaram.com: After six long years, the makers of the movie ‘Welcome’ are back with the sequel, which was produced by Firoz A Nadiadwala. The director Anees Bazmee and the producer Nadiadwala are ready to present the sequel, titled ‘Welcome Back’.

The sequel has Shruti Haasan, John Abraham, Anil Kapoor, Nana Patekar and Paresh Rawal. Anil, Nana and Paresh will be seen reprising their roles as Majnu Bhai, Uday Bhai and Dr Ghungroo Seth, respectively. The original flick featured Akshay Kumar and Katrina Kaif in the lead roles and went on to become a huge hit due to its humor and songs.

The makers of the sequel claim that the upcoming movie will be an out-and-out entertainer and will have more interesting elements than the first flick. Anil, while talking about his earlier role, said, “I enjoyed playing Majnu Bhai in Welcome because of its madness and fun, and the audience loved it too. I hope and pray that the audience enjoys Majnu Bhai even more this time.”

Meanwhile, John – who is new to the franchise – said that he is excited to be part of the franchise and is looking forward to work with the actors like Anil Kapoor, Nana Patekar and Paresh Rawal. The movie is currently in production.