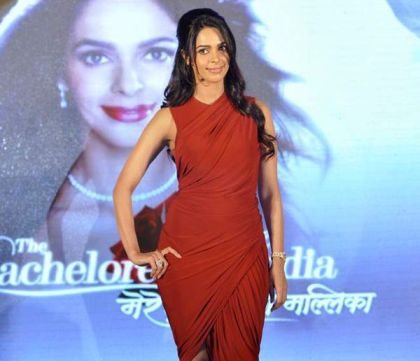 BollywoodGaram.com: Bollywood actress Mallika Sherawat recently got hurt during the shoot of the promo of her upcoming promo of her show ‘The Bachelorette India – Mere Khayalon Ki Mallika’. The ‘Murder’ actress reportedly fell from the bike and hurt herself on the sets.

During the shot of the promo, Mallika was seen sitting behind the bike when it accelerated and Mallika lost her control and fell from it. Moreover, the sari of the actress also got stuck on the bike and tore. The actress faced minor bruises, but her spirit did not go down.

Sherawat, to everyone’s surprise, got up immediately and created no fuss and agreed to shoot again. Mallika is all set to appear in the upcoming reality show which is based on the American TV show ‘The Bachelorette’.

The ‘Hiss’ actress will be searching for her soulmate among 30 contestants. The dating reality show is based on the international format and the show is all set to be aired on October 7, 2013 on Life OK. This will be the first time Mallika will be hosting any show. The actress is known for several controversies and has featured in many Bollywood movies and item songs.