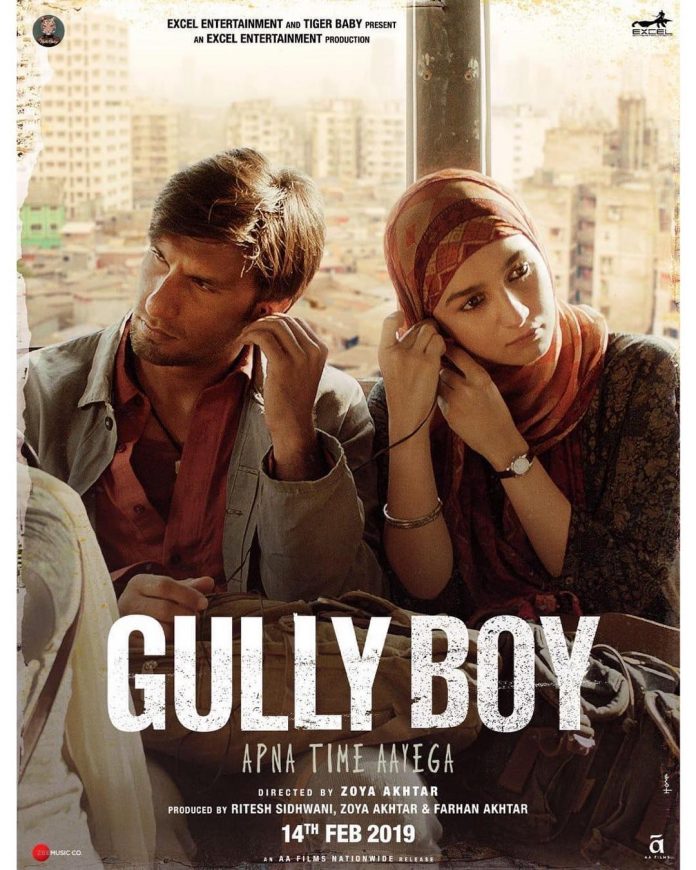 Young Bollywood actors Ranveer Singh and Alia Bhatt will be seen sharing the screen space for the first time in the film Gully Boy. The upcoming musical drama by Zoya Akhtar is one of the most awaited films of 2019. The makers of the film shared the first posters of the flick on January 2, 2019.

The first poster of the film has Ranveer and Alia in their characters seated next to each other as they share an earphone to listen to music. The actors can be seen in a de-glam and an intense look. The tagline of the poster says “Apna Time Ayega”. Singh in the film will be seen playing the role of an underground rapper in India who managed to beat all the odds to become famous. So far nothing much has been revealed about Alia’s character in the flick.

Before the official release in India, the film will premiere at the Berlin International Film Festival which is scheduled to be held between February 7 and February 17, 2019. The film also stars Kalki Koechlin, Vijay Verma and Amruta Subhash. The film has an inspiration from the real life rapper Rapper Divine, who in an interview with a leading daily expressed that he is looking forward for the film to release and hopes that it will help hip hop to reach every corner of India.

Gully Boy also has inspiration from the hip hop community in Mumbai. Rapper Divine was born as Vivian Fernandez. The film is directed by Zoya Akhtar and is all set to be released in theatres on February 14, 2019. The principle photography of the flick started in January 2018 and was wrapped in April 2018. Going by the look of the posters, the audience cannot wait for the film to be released. The audience is also curious to know more about Alia’s character in the flick which will be released in theatres on February 14, 2019.

the voice of the streets ? #GullyBoy