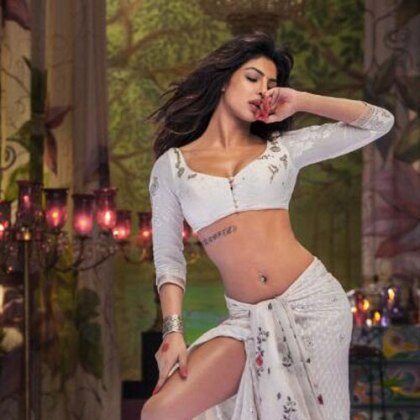 Bollywood actress Priyanka Chopra will soon be seen performing an item song in the upcoming movie ‘Ramleela’. The special item song has been choreographed by the veteran dancer Prabhu Deva’s brother Vishnu Deva.

The first look of the item song has also been revealed and Priyanka can be seen looking as astonishing as ever – posing in a white choli and dhoti with a very high slit. Priyanka Chopra was praised by Vishnu and he tweeted a picture of the two of them after they finished shooting the item song.

Along with a picture, Vishnu tweeted, “Ram leela 2nd song finished with Priyanka she is fabulous dancer and fun working with her”. In the upcoming song, Chopra will be seen performing with 20 other dancers. The ‘Agneepath’ actress recently shot item songs for two new movies, ‘Shootout at Wadala’ and ‘Zanjeer’.

As Chopra’s previous songs, ‘Pinky’ and ‘Babli badmash’ did not manage to attract attention of the audience, hopefully she will be able to do so with the new item song, as the latest promo looks very good. The upcoming movie ‘Ramleela’ is inspired by Shakespeare’s ‘Romeo and Juliet’. The movie has been set in rural Gujarat and stars Ranveer Singh and Deepika Padukone in the lead roles. The movie also features Richa Chadda, Gulshan Devaiah, Supriya Pathak, Shweta Salve, Barkha Bisht Sengupta, Abhimanyu Shekhar Singh and Sharad Kelkar.