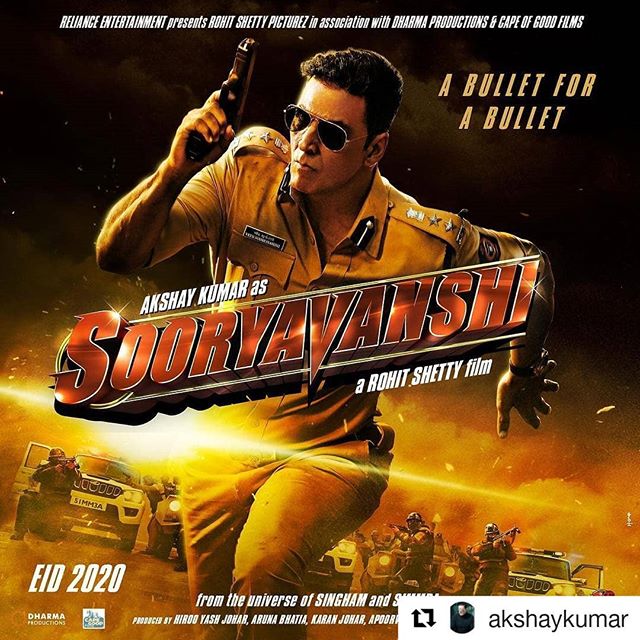 Filmmaker Rohit Shetty had hinted about the upcoming film Sooryavanshi starring Akshay Kumar in his film Simmba. The makers of the film unveiled the first look of Sooryavanshi. The poster was released by producer Karan Johar on Twitter.

Johar wrote, “Eid 2020 will be about a bullet for a bullet. Sooryavanshi stars the Khiladi of all time, Akshay Kumar and directed by the blockbuster machine Rohit Shetty”. So far two of the posters have been unveiled so far and Suryavanshi will be the third installment for the cop drama series by Rohit.

Simmba had given an idea with the cameo by Akshay Kumar dressed as a cop. Akshay will be seen playing the role of Veer Suryavanshi who is the chief of the anti-terrorism squad. The actor also Tweeted about the poster and wrote, “From Rohit Shetty’s police universe, get ready for the fire-packed Sooryavanshi”.

The film Simmba also had an extended came of Ajay Devgn who also wrote, “A bullet for a bullet… He’s not alone…”. Simmba had seen Ranveer Singh play the role of a cop while Sara Ali Kahn was seen playing the role of his love interest. Akshay had made a brief appearance in Simmba and said that he will be taking charge in 2019. Sooryavanshi will be directed and produced by Rohit Shetty and co-produced by Dharma Productions.,