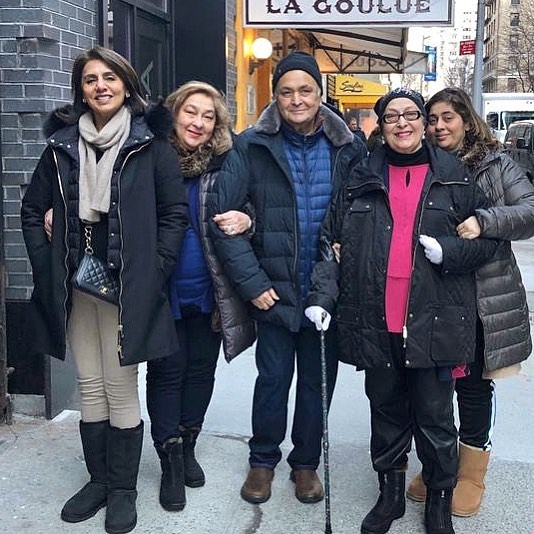 Yesteryear actress Neetu Kapoor has hinted to the fans that husband Rishi Kapoor, who has been undergoing treatment for an undisclosed illness in New York, might soon return home. The actress shared a picture with husband Rishi and family and said that they will soon be returning home to India after an extended stay in New York.

Neetu shared an Instagram post and said, “One of the Quintet leaves!! Will miss you @rimosky. Will soon be on the same flight back.” Rishi in the month of January had in an interview with a leading daily revealed, “My treatment is on, hopefully I will recover soon and God willing I will return.” The actor had left for the US in September.

During his stay in New York, Rishi Kapoor was visited by many Bollywood stars including Javed Akhtar, Anupam Kher and also son Ranbir Kapoor’s girlfriend Alia Bhatt. The actor went on to reveal that his journey so far has been long and tedious and required him to be patient. Rishi said, “The procedure is long and tedious and one needs immense patience which unfortunately is not one of my virtue.” Several speculations were made in terms of the actor’s illness. Some had even predicted that Rishi might be suffering from Cancer but brother Randhir Kapoor slashed the rumours and added that he is having a good time with everyone.
Photo Credits:Instagram