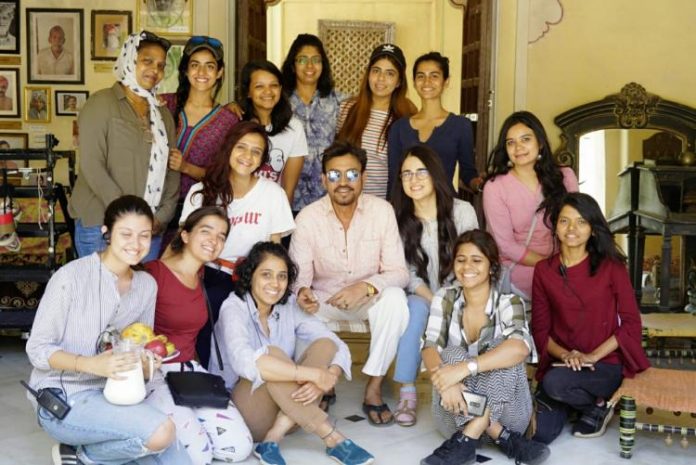 Angrezi Medium is one of the much awaited films of Bollywood and the makers are constantly teasing the audience with pictures from the shoot. After unveiling a few pictures and posters, the makers have once again revealed a new picture straight from the sets of the film. The picture has shown Irrfan Khan, Radhika Madan and the entire crew of the film.

The cast and crew in the picture can be seen all smiles as they shoot in Udaipur, Rajasthan. Reports say that Bollywood diva Kareena Kapoor will be joining the cast of Angrezi Medium in June, 2019 and will be seen essaying the role of a cop. The Veere Di Wedding actress has a small role in the film but the actress is reportedly super excited to film with Irrfan.

The film will be the first project for Irrfan after his recovery from neuroendocrine tumour. Before starting off the shot, Irrfan penned down an emotional note for his fans and wrote, “Maybe somewhere in the pursuit of winning we forget how much it means to be loved… In our vulnerability we are reminded… I want to pause to be grateful for receiving your immense love and support… I travel back to you, thanking you from the bottom of my heart.”

The cast and crew is currently shooting in Udaipur and the next schedule will begin in June, 2019 in London. A major part of the film will be shot in London.