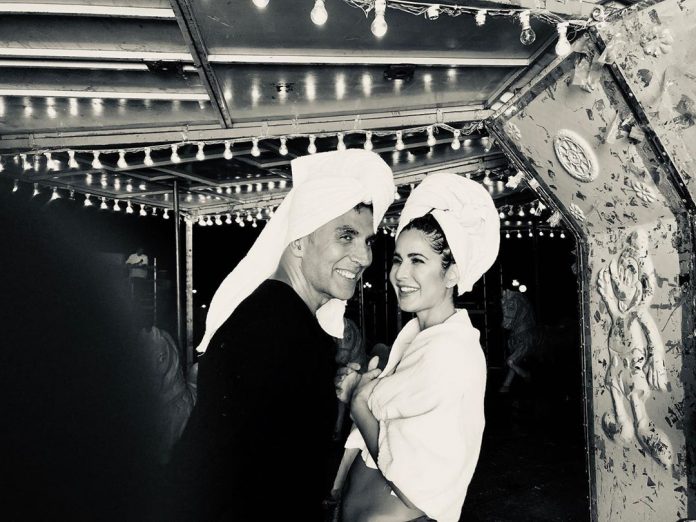 Akshay Kumar and Katrina Kaif will soon be seen in the upcoming film Sooryavanshi helmed by Rohit Shetty. In some good news for the fans, the makers of the film have planned a remake of the iconic song Tip Tip Barsa Pani for the cop flick. The protagonists have also started shooting for the song. Katrina Kaif shared the first picture from the sets.

The picture has shown Akshay and Katrina wrapped in towels while sharing a laugh. Katrina wrote, “Singing in the rain. #sooryavanshi @akshaykumar @itsrohitshetty @farahkhankunder”. Akshay had recently shared a post about recreating the song for the film by Rohit. Akshay wrote, “It would’ve definitely been disappointed if any other actor would’ve recreated #TipTipBarsaPaani, a song which has been synonymous with me & my career and I can’t thank Ratan Jain ji enough. At times like these you realize, we may have come a long way but we also go back a long way”.

The post by Akshay did not have any mention of Raveena Tandon, who had featured in the original song. Many of the fans of Akshay criticized the actor for not giving enough credit to Raveena. The original song was from the film Mohra which also starred Suniel Shetty and Naseeruddin Shah.

Sooryavanshi is all set to be released in theatres on March 27, 2020.