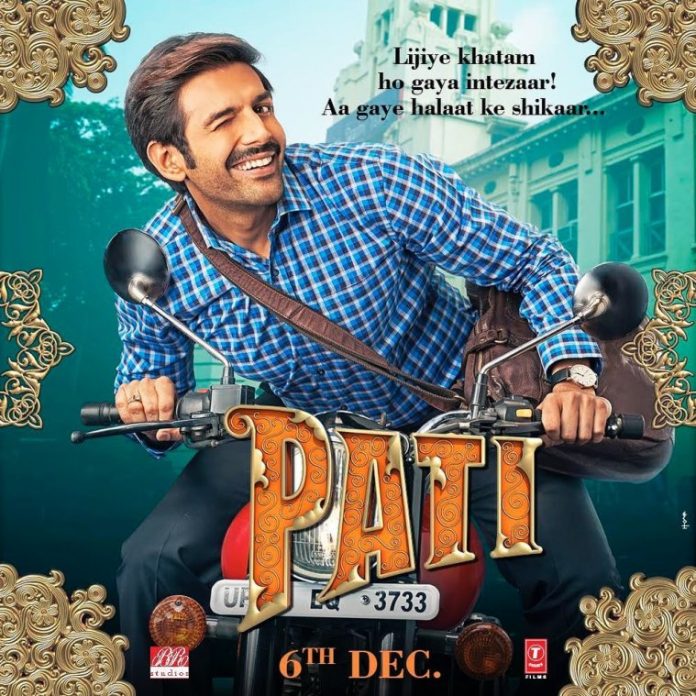 Kartik Aaryan, Bhumi Pednekar and Ananya Pandey starrer Pati Patni Aur Woh first posters have been unveiled. The new posters have shown the lead characters of the flick. Kartik can be seen in the regular middle-aged mustached man with a shirt and a trouser on his bike as he winks. Bhumi can be seen as the reserved yet beautiful wife in a simple sari and a book in her hand stating that she might be ambitious about finishing her studies. While the third poster has shown the young Ananya Pandey in an ultra modern look and is likely to play the other woman’s role in the flick.

The story is about Chintu Tyagi played by Kartik from Kanpur. Bhumi Pednekar in the caption of the poster has given an idea of her character stating that she is a little high maintenance in terms of emotions. Kartik will be seen getting along with his earlier co-star Sunny Singh. The actors had earlier shared the screen space in the film Sonu Ke Titu Ki Sweety .

Actress Kriti Sanon also has a special cameo role. Reports say that Pati Patni Aur Woh is an adaptation of the film with the same name that was released in the year 1978. The film will be helmed by Mudassar Aziz and is expected to be released in theatres on December 6, 2019.

Bhool Bhulaiyaa 2 to have Tabu perform on reprised version...